Is it time to buy gold or sell the Dow? Maybe Both!

We have experienced an awesome run in the stock market which has been unparalleled in the post-World War II era of investing. The last time such a huge run (36% up from recent lows not 6 weeks ago) occurred was during the Great Depression.

One interesting note about all depressions and major recessions in the last 80 years or so is that during the course of those events, the Dow Jones Industrial Average traded down to a 1:1 ratio with a single ounce of gold.

This means that a single ounce of gold could buy you the composite shares of the 30 powerhouse companies of the US economy. Where do we stand today? 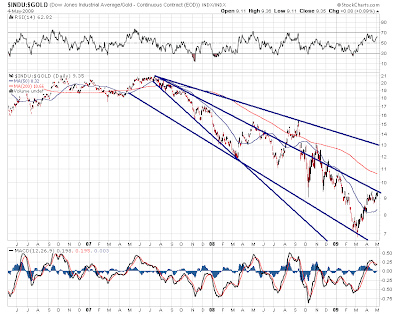 The Dow currently sits at 9.35 ounces of gold. Which, by historical standards is actually pretty high (The running average for the last 100 years is about 8.0 including all of the massive bubbles in that time frame.) It also looks to be hitting up against the top of the primary slope channel of the downtrend (which actually started way back in 2000 where the Dow was 44 ounces of gold). So what's the verdict?

During the Great Depression the Dow rallied over 25% after losing 40%. People thought things would get better. But FDR and his government intervention in the economic recovery (which at the time he genuinely thought was helping) created artificial demand without allowing the market to use scarce resources to generate REAL demand. Thus, it exponentially worsened the problem and led to a NINETY PERCENT drop in the major indexes.

This is the point where the Dow hit 1:1 with Gold.

Will it happen today? What's similar?

- A whole decade of consumption fueled by easy credit and loose money. (Roaring 20s vs 2000s. I wonder what they will call this decade in the future when the study our depression?)

- Government intervention in the economy. First in an ongoing sort of way under the guise of capitalism (Hoover), then an all out animosity for capitalism and massive government spending programs and deficits (Roosevelt). Actually sub in Bush Jr. for Hoover and Obama for Roosevelt and you're about in the same boat - except our guys are actually more interventionalist!

So there's a few things. But I just follow the numbers. Increasing unemployment. Government raising taxes against businesses to raise revenue to "create jobs" - this will actually destroy roughly 1.4 jobs per job the government creates (private sector is 40% more efficient than the public sector). Also government jobs generally are not productive jobs leading to budget surpluses they are service jobs decreasing the budget surplus.

Main driving asset value behind the bubble (houses) still falling fast. Commercial real estate to fall imminently and almost immediately. Hold on to it and take some shorts on companies like TCO and Mack-Cali who are ridiculously over-leveraged and losing rental clients FAST.

All in all. Buy gold and short the Dow. it looks like another wave down to 1:1 is about to begin :)

Happy trading all - remember keep your stops loose enough to account for the volatility we are sure to see but tight enough that your risk reward is at least 4:1.
Posted by Derek 0 comments