The answer is not much.

But these are all things that we at Investophoria expected.  This is the last hurrah, the final call for all the new bulls to pile on board.  The smart money started walking away some time ago and now this rally is left to the speculators and those who "hope".

Insiders had huge net outflows over the last 6 weeks.  The largest on record for some time - these folks who know far more about the state of their company's affairs than we ever could.  They were net sellers to the umpteenth degree!  For the month of august, insiders sold something like $36.00 worth of shares for every $1.00 they bought.

Doesn't sound like those in the know are feeling to rosy, does it?  That's about 18 times the average inflow to outflow for insiders!

It does get better though.

Another little tidbit to remind all readers that the bubble days are back:

That's right - 8 Initial Public Offerings in a single week!  That is more in a single week than was average during the absolute top in the markets (the average was about 5 per week).  What's more, there are now 89 companies in the IPO process.  Back in March, at the market low, there were only 29.

IPOs are a sign of timing - as in they prey on over-heightened sentiment.  The more IPOs out there, historically, the worse the timing is.  Remember the tech-bubble era?  The mania is back, folks.  Which means the hangover is most likely not far behind. 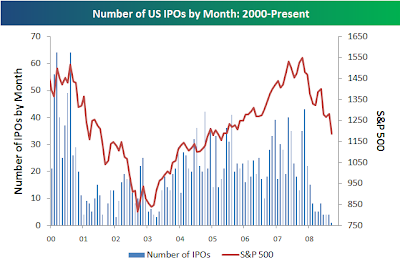 As usual, a picture says a thousand words.

This should raise a few red flags for anyone long out there.  Our strategy remains the same - we expect a very large and ongoing plunge in all asset prices across the board.  Housing, Stocks, Commodities, Warrants, Gold and Silver, Junk Bonds, etc.

We expect the market to turn within the next 30 days, and begin the larger and more violent of the declines as realism sets into sentiment.  The opportunity to buy will be sooner than we think (we think).  But it is most certainly not now.

I'm going to leave you folks with a story.  A short story, but one well worth paying attention to.

One of the clients I invest for had a meeting with the banker that handles his main business affairs early this week.  This banker has been in the industry for many years.  He's the type of banker who only handles the "important" clients.  Let's call my client Andy.

During their meeting, my name happens to come up.  "So, Andy , how are things going with Derek?  Has he made you any money in the last year?"

The banker at first thinks Andy is lying.  When he finally realizes he is not, he leans in.  "How did he make 50% in the last year?  Everyone I know lost his a huge amount!  Even I lost 25%!"

Andy shrugs.  He knows my investment strategy and "contrarianism" as well as he can with my few explanations.  But how do you put that into a few sentences.  He can't.

The banker does a double take.  "Cash!?  Everyone I know is getting into the markets right now - it's the only place to make money!"

Andy shrugs again.  "I trust his judgment," is all he says.

I met with Andy a few days later for lunch, to go over our game plan in the coming months.  He relayed the story to me.  At the banker's last line, I just had to laugh.

Being a contrarian is not an easy life.  Everyone you know will surely think you are crazy at some point or another, or wave off your opinions as nonsense.  One must learn to have nerves of steel - to keep that emotion in check, because just as the market is psychology, so are your day-to-day interactions.

It's fine to listen to what other people have to say, but remember to do your own research, form your own opinions and conclusions.  The results you see before your own eyes have not gone through another human filter.


Stay true the course, readers.  This story has many pages and plots to play out.

Why I Just Shorted AIG


I've been looking for an opportunity to put to work our New Leading Indicator (or - should I say - potential indicator. That's what that “putting to work” phrase is about.)

In markets, you can paper trade and speculate “out of the game” all you want. That's great for the first short stint, but the real learning comes from rolling up your sleeves and getting dirty. Having to live through those first few times (and probably many to follow) of bi-polarism that the market so naturally induces in all humans. Of nail-biting excitement as your buys rally up, up and away! Or that gut-wrenching feeling as you watch those hard-earned dollars burn out with every down-tick.
But that is where the real learning happens.

Any theory is great (in theory) if proven using past data. Any idea can be justified, any concept empirically “proven” (just look at how our government puts out its statistics, and what their REAL counterparts actually look like).

It's putting them to work that tests their mettle. Most theories fizzle out pretty quickly – the flaws become apparent sometimes on the first attempt. Those that don't fade often require radical change.
And then there's the bigger point.

The market is a different beast than most places where theories are tested.  The market is not a controlled lab - there are no rewrites or backup prototypes.  If you flub the idea that money is gone, those moments or market action are gone.  Sometimes licking your wounds is the most learning experience of them all.  In markets all you have is the now, which quickly becomes the past-to-be-studied.

To truly test a market theory, you do it in real time. You do it so you have to fight away the emotions, actually pick stop-outs and targets and actually USE them. You do it to see if this idea gets framed and stamped above the mantle, or if it gets tossed to the flames below.

Which is where we come to now. Test numero uno. And, I suppose, where the title of this article gets its genes from. 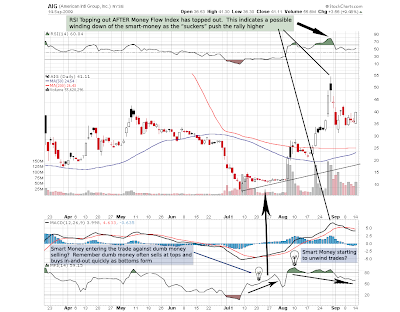 Our New Leading Indicator (I have yet to come up with a name for it – the combination of price action, RSI action, and MFI to find potential reversals ahead of time – any suggestions fire them my way!).

It has indicated (no pun intended!) a higher probability of smart money entering into a long position during the huge plunge and consolidated price action. This was followed by a sharp rally to over $55.00 per share.

Before that point the money started flowing out of AIG, potentially indicating the smart money winding down long positions and switching to short positions. Now we have a semi-down-trend starting to form and a slowly and surely decreasing MFI along with it.

It would seem that the optimal exit point for this trade would be when the MFI hits 20 or lower indicating a short-hammer on the stock. Kind of like last time it did this.  Not to mention this is all under the backdrop of a very bullish short-term market.

I am not going to get too technical about all of this, because this is a conjecture and a first trade, and instead of actually short selling the stock itself, I opted to buy $40.00 November Puts for $9.50 / pop x 2 contracts (a sample, so to speak).

If we DO see a re-occurrence of the price retracement as we saw in AIG in mid-July, there is the potential for at least 100% returns on these Puts.

I am not expecting to make a new low here – as you can see I have drawn a trend line to pick a rough exit point. I will close out my trade on two possible conditions:

Since the volatility on this stock is huge and 60 days is a long time in terms of AIG trader activity, I will set a stop out on the following condition:
We'll see over the coming few weeks whether our New Leading Indicator is off to the races or flops down dead.

When on earth is this rally ever going to end?  Or even pause?  It's amazing how market sentiments can continue to launch higher and higher into the stratosphere, how rallies can just seem to run on and on.  Room to Run with a Cap On.

For those of you unfamiliar with R. N. Elliot's Wave Theory, commonly known as Elliot Wave Theory, it's worth a look.  Even if you aren't a technical-analysis buff, the reading alone makes it very worthwhile.


But of course most of us just don't have time to be avid theorists.  This includes myself - to truly be a master of interpreting Elliott Wave counts takes years of study and practice, watching particular markets and seeing how the waves play out.  It is a game of human psychology entirely, with a set of rules and a list of guidelines as your roadmap to success.  Elliott Wave analysis is as much an art as it is a science that takes a lifetime to master - I'm more of what you would call a "hobby" Elliotwave-ist (is that a new term?)

Anyway, moving on from the "what" to the "how".  How does one go about applying Elliot waves?  More importantly, how are they useful?  For details, I'll leave you to read Robert Prechter's book.  As for what the finished product might look like, let me know what you think - Am I the next Da Vinci or the next Cheney? 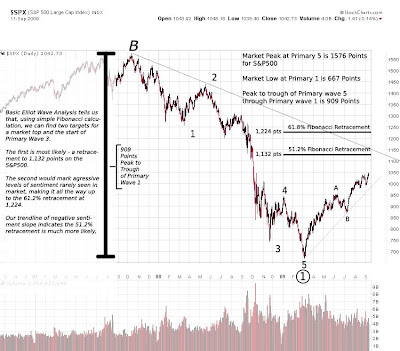 There is most certainly still room to run in this rally.  For any of you out there that doubt the Fibonacci "myth", you probably won't enjoy the Elliott Wave Theory anyway.  But try trading gaps and you will quickly find out just how useful those "hokey" numbers really are.

So, dear readers, we are calling a top.  Despite, using our new Leading Indicator, the fact that the smart money has been withdrawing from the market (this includes Insiders), we feel there is some more room for the rest of the players to dive in at exactly the worst moments.  Based on Elliott Wave Theory and our own findings regarding Mr. Market, this is what we can expect over the short-term:

However, once we have formed a top where the majority of these factors are extended beyond belief, we will surely find out just how fast those sentiments can turn.

As always, folks, be careful out there.  This market makes people and breaks people - hard and fast.  Those who lose deserve to lose.  Keep your heads up and minds sharp.