This is going to be a quick post.  Silver is in a blow-off top stage, as mentioned in my previous post, and in commodities these are generally spectacular, immensly participated in, and that the subsequent crash is usually at least as breath-taking as the run-up preceding it.

Gold, Silver, and the HUI all had daily reversal bars today - quite a feat considering all 3 popped to significantly higher record highs right off the open. 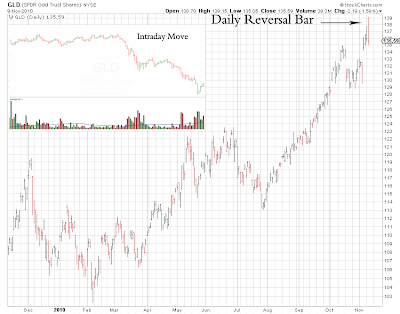 Silver was an interesting case, holding on to more of its gains than its more valuable cousin.  That being said, the intraday trading range for silver was around $3.00 / oz, and the SLV ETF volume was a record-shattering 148.42 million shares traded on the day, just under $4 billion (this is equivocal to about 150 million ounces of silver, roughly 1/6 of the average worldwide yearly silver production for the past decade.  In a single day.)  The past two trading days on the SLV have ousted every weekly volume record for the ETF since its inception.  This appears to be a week to remember for silver.

A closer look at the intraday action reveals that, besides the overall wave of volume, the behavior was that of distribution and very strongly.  Volume spiked with each reversal and waned swiftly as the ETF attempted to regain lost ground.

Is this (finally) the start of the major decline in silver I have been calling for?  Right now, it is extremely difficult to tell - probabilistically silver is due for at least a significant correction, and it should find itself back within the confines of the channel, at a bare minimum, if it is to try another rush into a blow-off yet again.  If this is the start of the larger, more protracted decline, then silver should swiftly plummet below the $20.00 / oz mark and smash through a few significant support levels.

To further solidify the position of at least a near-term trend change, on final intraday correction and push lower is required tomorrow before an upward move of 1-2 days would take place.  If silver immediately turns in the morning and attempts a thrust upward, a break of  $26.96 on the SLV (27.81 COMEX futures spot) would indicate another rapid thrust higher to finish off the move.

If you are long gold stocks, silver stocks, or anything in the "paper" arena of precious metals investing, be extremely careful.  The volatility experienced in these markets was vastly more intense than that in the rest of the North American stock markets, and could be a precursor of things to come in the very near future.

Have a great week!

P.S. - A quick afterthough of some significance:  It appears, judging by the last several days of behavior, that the US Dollar has finally put in its low against the Euro and is quickly starting the largest part of its multi-year rally that began in 2008.  Forex traders long EUR be wary.

I am anticipating this pullback in stocks to accompany a run-up in the dollar, and then the final peak in the broad US indexes to accompany a higher low in the USD within 1-3 months, whereby markets will jive back up and start moving more in tandem.  I will post some chart hypotheses on this in the near future.
Posted by Derek 13 comments