The last 10 trading days have been interesting ones.  We've had calls from "top economists" (who were as clueless before as they are today, I might add) for the end of the recession and the start of a long, arduous, recovery.  Echoes of weeks gone by.

Clamors are heard from all interested parties that real estate has finally bottomed.  The Case-Shiller Home Price index has inched up for the last 7 months straight.  Pending home sales are at their highest level in recent memory.

Despite these calls we have seen higher unemployment, worse industrial performance, and auto sales further into the abyss.

Sentiment is beginning to turn.  RSI has swung violently down as this rally has petered out, showing the weakness of its latter stages.  Meanwhile speculation is ongoing as IPO's and Corporate Takeovers are at or above levels seen at the top of the market in 2007.  Fund managers are shuffling around toxic assets and worthless stocks like its a trillion-dollar game of hot potato!

The tide is still up, to this point.  As I have said in earlier posts, we could see one final manic, bipolar-euphoric push to new heights.  The technicals are screaming that there is one last chance for this rally and it is right on or about 9450 for the DOW. 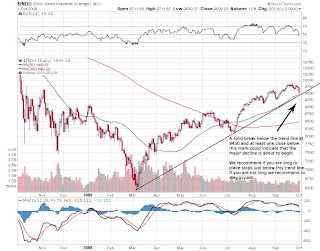 We are within a few points of this marker.  It can be said with almost 100% certainty that while retail investors of most walks are seeing this latest dip as a buying opportunity, a broken trend-line is the mid-term harbinger of doom for the US markets.

As always, we are sure Mr. Market has a few tricks up his sleeve and would not be very shocked if there is a last manic rush.  At this point of the game, however, the odds aren't looking so good for the many longs out there.

We re-iterate that, although we offer recommendations only - and that your money is your responsibility and yours alone - if you are not an experienced trader, you sit in cash and ride out the next wave down.  If you are familiar with short-selling there are many opportunities to be has as the latest portion of the rally revealed just how speculative its nature was.  Many companies either owned by the government or having negative equity values saw 300% and more increases in share prices.

The market will surely surprise us, but with some of the last great market bears weakly donning the bull suit of late, it seems there are very few left on our side of the aisle.  We dropped the bullish suit a month ago and quietly donned the grizzly garb when everyone was running for their horns and hooves.

That Mr. Market, the maestro, waved his red flag and they all came running.

Sentiment will continue to plunge as people are caught trying to make up losses incurred last year, and find they are in a second bull-trap and doubling down on the pain.  We should see the VIX near its highs set last winter, if not higher.

Don't be one of the many.  Guts, brains, and an iron resolve will make a few very wealthy in this market.  Be one of the few.