'Tis the Season of Hope

On December 4th, Investophoria wrote '... we have returned to the "olden days" of the bubble era'.  This was demonstrated by quantifiable measurements of investor complacency.  We also noted that this market is literally on less footing than in '07.

That footing has gotten even more slippery, the bullish gas powering this motor reduced to near fumes.  Since December 4th, when we last posted an update on our market thoughts, the market has done this: 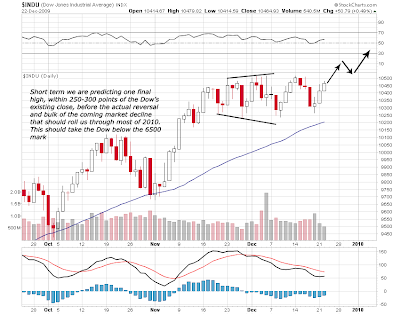 Despite the fact the Hope mentality grows stronger and stronger, as indicated by the further increase in bullish extreme in the next charts, the market is virtually sideways.

We are, however, anticipating a further incline throughout holiday trading on very light volume that should take the Dow up about 250 - 300 points from its current levels before the long-term reversal and downtrend resumes.

This bear market has at least one major downward leg in it as deflationary pressures continue to mount and all inflationary attempts by government are either utter failures or completely counterproductive.

Here are the Investor Intelligence Surveys for the most recent period.

We are at even higher extremes in optimism and bullishness in stocks will almost nothing to show for it.  Again, this is indicative of an imminent top in the major indices, which should follow the risk currencies and commodities downward.  Gold and silver have already resumed their bear-market trends and the primary direction for these metals is down.  The majority of commodities should follow suit as virtually all markets except the USD decline in near tandem. 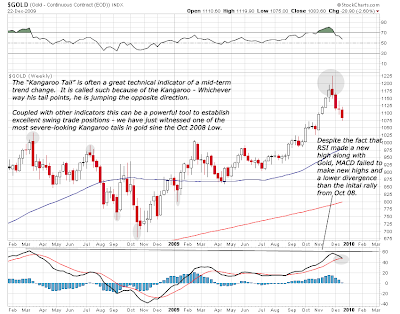 As more debt defaults are called in, the demand for USD's - which make up a huge majority of all debt in the world - will continuously grow, fueling even further increases in its value due to the actual scarcity of cash reserves relative to debt, which is currently treated as cash in most markets.

If you haven't already, our recommendation stands firm - treat yourself to another gift this Christmas Season and be thankful for an excellent exit opportunity for your stocks, muni and corporate bond holdings, and commodity holdings.  As we have stated many times before, in this Deflationary Depression, "Cash is King, and will soon be Emperor".

Enjoy the holiday season all, and be thankful for those around you!