So I'm not going to get into any politics today or any of my major issues with the fundamentals of the modern economy. There's still plenty of time to watch those little tidbits play themselves out.

But I will remind everyone that if you MUST hold assets priced in US dollars over the coming years please make sure they are things that hurt when you drop them on your foot! (Coal, Gold, Silver, Oil, etc.) And, hey, the producers of these things might not be such a bad idea either!

But a few potential opportunities have arisen on the TSX.

First off, Uranium One, a producer that has some large projects in Kazakhstan. Over the past 3 weeks the stock was hammered down from over $4.00 to under $2.00. This was based on the news that a company that Uranium One had done business with was being investigated by the governments, and that there were charges being laid against certain individuals for embezzlement of government funds, corruption, payoffs, etc.

You know the drill.

So anyway, everyone panicked like crazy since U-One did business with these guys. However one thing that should be noted is that two separate transaction were done by Uranium One, one selling off a large asset and the second buying that asset back a few years later. Both of these transactions were totally examined and approved by the same guys who are now laying the charges against the other company. The charges don't have anything to do with the Uranium One deal, but with other financial dealings of this other company.

Remember the whole "the psychology of trading" thing I wrote a long while back? Well, it turns out that sometimes that stuff presents some huge opportunities in an even huger way.

UUU (uranium one's symbol) Traded down to around $1.65 a few days back. Since then it's been on a pretty solid tear, gaining over 55% of its value since then. However, this puppy still has a way to go.

I picked up a small position at $1.85 of 500 shares. Today I added another 2,000 shares to my position at $2.60. I used a simple trend line to pick this second entry point (The first was strictly based on the fact that this was WAY WAY oversold!). The stock bounced off the trend line and held up really well. The moving averages are all still looking good. I have a sneaking hunch that this is a longer-term dumb-gap fill up to $3.25 where the panic really kicked in.

Here's a chart with the trend to show you what I mean: 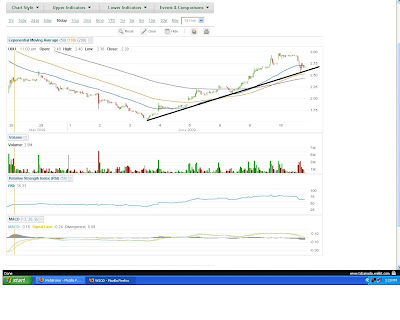 The next one I'm looking at is an OilSands producer called OPTI. It's currently in a really weak short-term downtrend after spiking up hugely on buyout rumors (apparantly there's a few brokers being investigated for spreading them falsely). Once I see a clear signal of trend reversal I am planning on buying this stock. I'll keep you posted on the technicals.