True believers in a massive deflationary wave are few and far between.  In fact, among professional analysts and more "renowned" forecasters, you can count the number of real deflationists on one hand - maybe two if you stretch things.

The large majority of forecasters, and more importantly the investors who listen to them, are predicting inflation.  Hyperinflation is a fairly common term these days, one can hear it frequently by flipping on a major financial station.

However, talk is talk and talk is cheap.  It requires no investment other than a few breaths or clicks on a keyboard.  The place to watch is where people are moving their money.

I have mentioned in this space before about the fallacies of "efficient market theory" and also about "market manipulation" (one of the most commonly used excuses by traders and investors alike for why they lose money).  The market is a singularly interesting composite of activity - millions of people gather together every day with their excess (or not so excess) capital to find a place to compound it.  They do so via a foggy window, in that the information on what they are buying is extremely limited and the things they are buying are intangible. With such a limited amount of information, people naturally revert to the same mechanism that most do when seeking safety or advantage in physical life - they follow what other people are doing.

Most investors and traders are not aware of this phenomenon.  It is a totally natural impulse, the same type of impulse that organically makes humans form lines or walking-lanes in busy foot-traffic.  This is why such a small percentage of traders can be successful over the long term.  Objectivism and discipline are two keys to successful trading.

But I'm not here to talk about successful trading in the aggregate.  I've found a few interesting tidbits that I believe might be setting up the market for its next wave down (and in response to the market downturn, the next serious bout of monetary deflation - right in time for "QE2").

For the first time in 6 months, net inflows into US Equity markets were positive for two weeks in a row.  US Equity markets took in just under $2.8 BIllion dollars last week.  This is the first time two consecutive positive inflows have occurred since, you guessed it, just prior to the April 26 market top.  That in and of itself is not a damning piece of data for market behavior, however within the context of the past several months it is very pertinent.

The story of municipal, regional, and corporate high-yield debt continues to play out and is, quite simply, a ticking time bomb.  Since markets are still yielding a very bearish low dividend in a historical context, investors have been flocking to Junk Debt in order to start getting some kind of return on their money.  The obsession with yield and the flagrant disregard for the security of their principal investment shows that the underlying acceptance for highly-speculative "investments" is still engrained in the mind of the average investor. 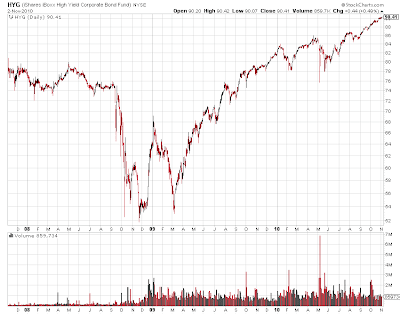 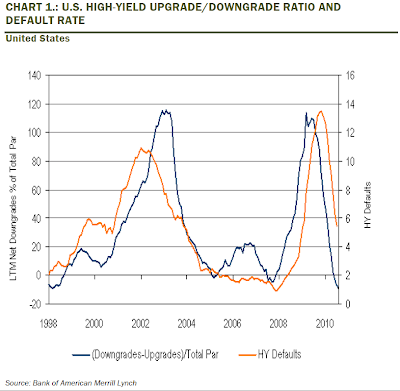 Bond Up/Downgrades are at a bearish extreme seen only just prior to the Dow:Gold peak before the turn of the century.

Sentiment measures are extremely one-sided across all markets.  90%+ Bullish readings on the short and long term DSI are spread across commodities like Gold, Silver, Copper, Sugar, Cotton, currencies like the Euro, all 3 US Equity markets, US Treasury bonds, etc.

Meanwhile the US Dollar's DSI is flailing to stay above 10%, and has experienced one of the longest periods on record with a DSI reading below 15%.  Internals on each subsequent high in stocks, bonds, speculative currencies, commodites, et al are weakening at each new wheeze higher.

All markets are lined up as a massive one-sided trade.  Double-speak on commodities runs rampant, including things like "x will go up if the economy improves because people use it more and demand will increase." and "x will go up if there is a depression because people run to it as a safe-haven".  There is a host of reasons people cite.  The most popular reasons generally encountered are:

Inflation fears are so rampant right now that TIPS Treasuries actually traded up to a negative yield recently - this means that people are so worried about protecting their cash against future losses via inflation that they are willing to pay a small percentage just to insure against that chance.  With the DSI on Treasuries hitting 98% recently, they are one of the ripest short opportunities on the market.  What people are DOING is raising a massive red flag to me that expectations on inflation are in the red zone, meaning the probability of seeing $5000.00 gold in the near future is extremely slim.

Gold appears to have put in its major top, although with the non-confirmation of silver being erased after 2 weeks we could see yet another stab upward above the upper channel line on both metals.  It's movement patterns thus far suggest it is the first asset to have topped out and should soon be followed by a plethora of others.  I have not accumulated any physical metal since gold was below $900 and silver below $12.00 and I will not be purchasing any more until they are well on the way into their downtrends.

As for stocks, there are quite a few good shorts out there now.  Some of the "Darlings" of the recent rally, including Amazon and Google are extremely overvalued and have seen hugely optimistic readings for the past 2 months.  The entire market is elevated and stretched and barely wheezing along.  If I see a definitive turning patter play out I will post it as soon as I can.

I apologize for the lack of updates for the past 6 months.  I have been doing a lot of consulting work on the side lately and only made a few multi-week swing trades in the interim outside of my core positions (Long USD/short Euro and short US Treasuries long term via Put Options.)  I'll try to pick up the volume of my posts through winter as the markets become more volatile.

I hope all my readers are doing well.