A Long Buy for Core Holdings

In the spirit of the ever-increasing optimism towards China, I'm picking up a decent chunk of shares in a small cellular phone producer trading on the Amex.  It's trading at extremely low multiples to earnings and sales, as well as its price to book ratio.

Here's the breakdown on the valuations:

This is a low-debt, nimble little company who have produced some award winning cell phones that have been quite popular in Asia.  They are working on expanding their smart-phone line to include low, medium, and high end units which should open up their market base.
Furthermore, the chart is showing a continual weakening during longer periods of selling and what could be a reversal in price.  This is a core holding so most like a 6 month + holding, and could also offer buyout potential if any of their designs hit it big in the coming year or so.
Take a look at the chart: 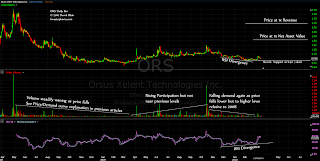 I'll probably be pulling the trigger on this one tomorrow or Friday, and will post the entry price once the trade has been executed.  The price may take a dip a few percent lower, compared to recent similar price action, so I'll be looking to get in on a down-day.
Chinese stocks might see another blow-off similar to 2008, although the fundamentals down there are getting pretty shaky (despite what many claim, even though the Chinese government is using cash and not debt to finance its stimulus, it is still over 400% greater relative to GDP than the spendthrift US Government, and it is all on the capacity side and certainly not market driven.) - positive psychology can extend out to amazing lengths and we could see the Chinese exchanges making new highs.
Have a great night.
Derek.

Banco Santander has broken to the downside after three attempts at pushing through the $14.31 mark, forming a triple top.  Support at $13.90 was just violated and the stock is picking up the pace to the downside.  We should see an accelerated drop over the next several weeks taking the stock to new lows.  We still have 50% of our original trade open from the $17.20 entry (the other was clocked out at $12.50 which was our originally cited first target (12.20 - 12.60).

There is literally almost nothing new to report in the way of developments since our last article - The S&P500 is still sitting just a hair above its January high, currently invalidating the terminal pattern that developed to start the initial move down.

This does increase the case for another bullish run in the short-to-mid-term, however the markets have stalled after long time-frame of consistent buying, making higher highs on waning technicals, including the Advance/Decline ratio (which was actually negative for the S&P500 yesterday).

Unfortunately for the shorts, markets like this can plod on for a while - Hope is something that takes a while to fizzle out, and in the meantime it can be an unbearable experience for those waiting for the reversal.  Patience is key, and if you don't have that, sit on the sidelines and wait for a clearer signal, or find a few long trades to make in the interim.

A word of caution, however - even though we've scaled back our short position in the meantime, we are not committed to a major long move in the individual markets.  That's not to say that some individual stocks and other assets could have excellent performance, as there are great buying opportunities in every market, if one knows where to look.

As such, be careful if you trade to the long side - I'm expecting some sort of small-at-minimum pullback in the markets because they are weak and overbought.  But if this consolidation keeps up for some time it usually means the market is building something big and isn't quite ready to pull it out of the oven just yet.  Right now it's like watching paint dry, and one needs to be prepared for a move that will surely take either the bulls or bears by surprise.

Economically we are in worse shape than before the major stock indices started declining, with only a fraction of the horribly mailinvested resources from before being liquidated - the rest are hidden on bank balance sheets and undercapitalized, or guaranteed by the government - not to mention that if you factor out the trillions dumped into the economy by the State the GDP numbers are still very negative.

The fact that such a weak recovery has been eked out by such a tsunami of keynesian and monetarist policy indicates that the psychology just isn't taking like it used to - People's attitudes toward money are changing, and such a change takes time - especially after a multi-generational growth of acceptance for burdensome debt.

Stay wary out there because, just like last time, when deflationary forces hit they will snowball quickly and take the maximum number of committed market participants by surprise.