We certainly believe that the stock market is at or nearing an imminent turn towards a rapid crash in prices.  Against that movement, we have the USD, which should perform at least as well as it did through the end of last year as equities around the world collapsed in price.

The Daily Sentiment Reading on the USD is holding at 4% bears, and has been at or below this level for over 3 weeks now.  I cannot recall ever seeing a highly negative reading stay so dire for so long.  This shows that there is almost no one left on the long side of the trade - similar to the type of reading we saw on the S&P500 through March of this year, just before the market turned and started its most breathtaking rally in almost 3/4 of a century!

Open interest on the EUR/USD has been setting record after record, showing that the last legs of this rally have been purely speculative, most likely investment banks using that well-earned TARP money to try to squeeze out some more profits.  The open interest move from July to August alone was from 244,666 (a record for all time) to 271,410 (a much higher record for all time!).

Even just by looking at a chart we see the same sort of waning true strength with some simple indicators. 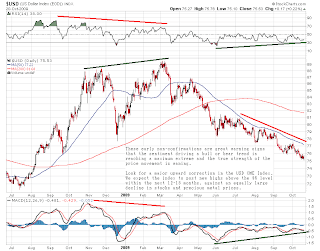 Notice that, just as in Nov-March where the USD made a new high, the price itself might be moving up, but the strength of those price movements is dying fast.

As usual, we recommend taking the contrarian approach - selling stocks, just when the media thinks that everything has been effectively papered over by the government and the "worst is over", and buying the dollar, at a time when a fellow like Robert Kiyosaki is saying "it is trash" and that we should all be buying precious metals.

That's right, folks.  Robert Kiyosaki - the fellow who was telling you to buy maximum leveraged real estate is now telling you to dump the dollar for gold and silver.  Smells like a great mid-term top-picker to me.  The "gurus" all tend to be right just enough for everyone to think they are gurus, then are proven wrong.

To conclude, we are forecasting a rise in the USD index to above the 95 level, coupled with a significant (probably more so in percentage terms than the last one) decline in stocks.  Our recommendation continues to be to liquidate stocks and risky bonds as soon as possible, and hold cash and short term treasury bills that can be sold quickly for the time to buy stocks and other assets.  For the more daring investor, finding several weak sectors of the economy (especially in deflationary times) and short-selling the shares or buying LEAPS against the weakest companies is recommended.

Full Disclosure:  While I own precious metals from years of accumulation, and generally favour silver much more than gold, I have not purchased any physical metals for almost 12 months, and do not plan to until a major correction in dollar terms (est. <$8/oz for silver) has occurred.  I own LEAPS on almost all of the major US banks, several commercial real estate companies, and Barrick Gold.  I also have transferred over 50% of my portfolio in cash form into short-term US treasury bills.

Remember, Investophoria.com is the opinions and trading activity of the author only.  Any investment decisions you make are your sole responsibility.

As the US markets doggedly continue their upward tread, a few points need to be clarified.  I have had several readers email me regarding my recommendation to sell out of stocks and take long-term short positions as of late August.  Those readers argued that the market has gone up for almost 8 more weeks since then, and that my recommendation missed a significant rally.

At first guess, that might sound true.  However, as I demonstrate on this chart, while readers might feel like the market has gone up drastically since my sell recommendation, it has in fact only gone up about 7%. 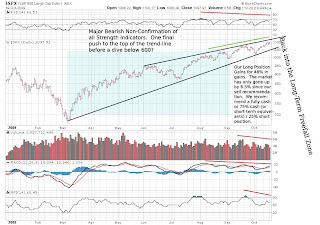 The reason it feels like so much more is exactly the reason that you should consider selling your stocks if you haven't already - the news has been hyping the higher-high situation, economists are out of the woodwork with raised GDP projections and analysts are raising price and earnings targets across the board on public companies.

However, despite the obvious improvement in sentiment, over 80% of the market's improvement in the way that counts (dollars and cents) was fully completed at the time of my recommendation.  That isn't to say that the market could make another higher high, maybe even two.  What I am saying is that the odds of a violent decline in stock prices only go up with each up-tick in this market.  Sentiment is too wildly positive on stocks and the economy, as I have covered in previous articles.  It is also far too wildly positive on gold. 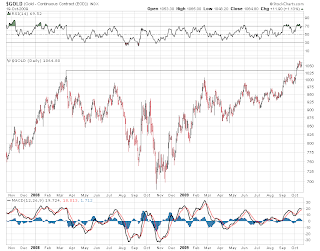 Gold has made an all-time high, and broken over the important psychological barrier on a weekly close for its first time in history.

However, when priced in a basket of other major currencies, one can see that gold is not actually making new highs relative to its March '08 historic launch.

In fact, this is almost a picture perfect example of an A-B-C correction formation when priced in a currency basket.  Wave B would be at or very near its peak, and wave C should carry the price of gold down below the low set last October. 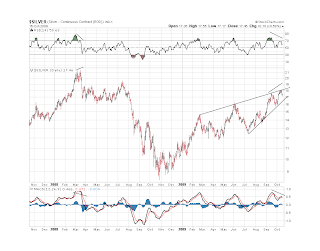 The other  worrisome aspect of this high in gold is the fact that, despite being historically consistent in so many eras, this new high has not been confirmed by silver, even when priced in USD's.  This illustrates a far-too-positive sentiment level on gold that must correct.  Remember, as I said in my much-hated article in September, the time to buy gold is when everybody hates it - ETF inflows are setting records, Chinese governments are posting advertisements to citizens on buying gold (honestly, when has government EVER been good at timing a market?), physical investment demand is at a peak, and prices are at all time highs despite the fact that production is increasing and overall market demand is down.

I am forecasting a serious multi-month decline in precious metals, led by a reversal in over-extended sentiment and a bottoming and multi-month incline in the US Dollar as deflation rears its head.  We should see precious metals at new 2-year lows, if not 3-year lows.  This will most likely be the last good buying opportunity for these purchasing-power-retaining assets as a multi-year bull market ensues and takes them somewhere close to the "gold bug" high's in price.

As for stocks, I retain my advice.  Get out of your long positions, hold cash and short-term safe bonds that can be rolled over easily.  Be prepared for a buying opportunity few people ever get to see in their lifetimes within the next 5 years.

Be Safe and Smart out there, Folks!