Today, Another Day in Bull Land.

Markets across the board are losing steam as sentiment continues to grow more optimistic, but participation backs off.
Interestingly, many readers emailed expecting major declines in the US markets today as a result of the Fed's decision to raise its emergency loan rate a quarter point to .75% - despite that supposedly market-making/market-breaking decision, the markets are actually up  today thus far.

This is yet another indicator of what I have been saying here at Investophoria.com - it's not news that drives markets but the sentiment of existing players - people use news as a justification for decisions already made, which were made with little information and under a highly emotional circumstance.  Of course they will want justification!

However, the market is its own creature, and since everyone and their mother probably expected this to be bad for the markets, guess what - they magically decide to tack a few more points on to the upside!  It will most likely take a sustained drop down for a week or two before this becomes something of "concern" to the average investor, who will by then be looking for a reason to say he sold his stocks.

While there is still some upside potential in most assets the momentum is waning, volume is waning, all measurements of true strength are waning, indicating a top is near.

Anybody feeling particularly bearish right now, watching these markets?  Good - that's when you know you should be...

So today was a fairly consolidated day, especially within the context of the rising wedge formation in the broad indices.

The S&P500 has an even more compelling rising wedge formation as well as a double gap, the second of which has been unfilled and should offer some downward magnetism for stock prices next week.

The two highest probability scenarios for Monday are that a good sized spike occurs through the top of the wedge to complete the corrective pattern, and price turn down from there.  The second is that negative sentiment already develops over the weekend, resulting in a large gap-down on Monday.  The two minor support levels noted on the chart are good indicators of a resumption of the bear market trend if violated.

At most we expect only 1-2 more days of this correction before a resumption (and a larger one) of the downtrend to take stocks broadly lower.  This will be bad for gold and silver as well, as they have been in tight sync with stock prices, especially since this correction started (a bit of a kick in the shins for those still saying that gold is currently being treated as real money, and not as a speculative asset).

The dollar rally should also resume next week in full force, and the delayed effect on the price of gold should return in full force.

Have a great weekend folks!  I will be spending some time in my office tomorrow sorting through several mountains of paperwork, so if anyone has any questions in the interim I might fire back some replies on Saturday afternoon.  The official website is coming along well and we are excited to be developing products that will cater to precious metals enthusiasts, long-term investors, and traders as well.  Any other ideas (we've had some excellent suggestions from readers already) are always welcome, and can be sent to my personal email at J_Derek_Blain@hotmail.com

Bear markets are one of the hardest times to keep your head on your shoulders - I'm not necessarily talking about you, reader, but using the word as a general "cutout market participant" descriptive.  Either that or I am referring to myself in the third person, which (I'll have to check the definition later to verify) might just make me crazy.

However, all insanity aside, you are here to read about markets and I am here to write about them.

So, let's recap what happened while I was away fishing and involuntarily away due to some router/phone system problems.

1)  Gold made a major spike down intraday followed by a nearly-full retracement of the new low - gold bugs celebrated and everyone who had a "mass email Derek a declaration of triumph" button has been mashing it ever since.

But the story isn't over in gold just yet.  See, there's a funny thing about bear markets, however short or long - they never "just happen".  It's not like everybody all of a sudden wakes up and says "hey, I am going to sell this asset today because I don't like it anymore".


No, bear markets - while they are certainly faster in time and breadth than bull markets - are not an A-to-B affair.  They take time, they take a level of market bipolar-ism that only a bear market can produce.  Market participants experience denial, then relief, then disbelief, then feel angry, then feel despair (if they are long, mind you).

We are certainly nowhere near then angry stage, and therefore nowhere near the despair stage.  The DSI numbers were pounded down on gold blindingly fast, evidencing the elevated hope mentality (versus worry) behind the gold traders, which one could easily surmise a larger and more drawn out correction from.

One question many readers send me is:  What if you are wrong?  What if gold is just experiencing a minor correction and is still going to go up?

The answer to that is one I have written many times - the end goal of gold and silver is to use them as a savings vehicle - of course keep some cash on hand for functionality sake, but if you are truly a believer in gold and silver, keep a good portion of your cash savings in real money instead of fiat currency.  In late 2008 when my clients, friends, and family asked me for advice and I told them to buy as much gold and silver as they could get their hands on, they kind of thought I was crazy.  Now they ask me when to buy more of the stuff.

As a gold and silver saver, my goal is to accumulate as many ounces of the metals as possible - and it should be any gold and silver saver's goal.  So if I see a juicy buying opportunity approaching, I am going to wait for it, because in the long run it benefits me far more to do this than just blindly buy physical whenever I have an impulse to do so.

That being said, what I'm working with here are probabilities, using price as my ultimate guide to determine group psychology towards an asset, and secondary indicators as confirmations or dissenting points (in which case a re-evaluation would be order).

And since, in late November 2009, gold busted right through the top of its long term log-scale channel for this entire bull marke, and since every time it has done that it has gone down to at least the bottom of that channel, the odds from a strictly one-look perspective are that gold will head down to the bottom of the long-term log channel, putting its correction at a minimum at around the 900 - 950 / oz range.


Then take into account the other factors - the massive pile-on of open interest in the COT report perfectly correlating with the upward price swings in gold.  The fact that buying gold is so in right now - with stores selling bullion bars out of their storefronts, Cramer doing a full 10 minute expose on gold and citing every cardboard cutout reason to buy gold that gold bugs have been passing about since time beyond, and the fact that every major financial site has a gold quote right on their front page, despite the fact that the two other most commonly quoted commodities (oil and natural gas) absolutely dwarf the gold market in size and contribution to the economy (i.e. functional nature).

There are a hundred other secondary and trivial reasons that gold should experience a larger unwinding than "the usual".  The sentiment towards investment in general is still far too positive - we are talking about a major unwinding of decades of optimism towards capital gains and markets.  Gold has now become a victim of its own greatness, and has been lumped in as an "investment asset" instead of being money, which you and I both know it truly is. 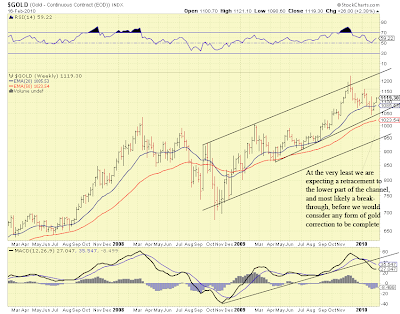 Even just a move to the bottom of the channel here indicates we have just experienced 50% of the barest minimum move acceptable to account for a real correction, even from a "perma bull ongoing shot to the moon" perspective.

And that's not taking into account the soon-to-be-realized fact of deflation in total money that is working its way inexorably towards the unfortunate asset-owner and investment community.

For every other asset besides gold the downside potential is still massive.  For gold there is a high probability of an exception based on some simple behavior that will most likely take hold of the general marketplace in the coming years.

There is still going to be a rush into dollars to pay off outstanding debts - despite the face that the dollar is, in the end, fiat currency, it still has one monopoly power that no other "money" has - you can't take a contract denominated in dollars to court and try to get paid in gold - dollars are what you get paid in, and so in order to go to the effort of doing so, one must have some modicum of faith in dollars.

However, this is not a scenario that will last very long - once the major deflation has pommeled the monetary system, the piper will need to be paid.  This is the point where we should see mass psychology shift to the final negative stages for the dollar and as a result into a positive sentiment towards gold as money.  Since most other fiat currencies are at least as flawed as the dollar or worse, the time where gold may once again be viewed as money is near at hand.  It is something that I am excited about from a historical perspective and excited about from a developmental progress perspective (i.e. the DOW went up 400% in gold terms - productivity to money - before fiat paper and the federal reserve system was introduced.  It is now below where it stood in 1913 in gold terms).

Now, enough on gold.  Here's a quick run-down on the Dow.

In this article, we posted a chart of the S&P 500 and pointed to the already existing lower trend line as a potential support point.  While the correction has played out longer than we anticipated, a correction it is nonetheless.

This morning the S&P500 hit the ideal initial resistance that we placed on that chart, and has thus far failed to break through.  One final stab could occur in all the major broad indexes to the secondary resistance, but the market should have a tough time breaking through that area.

However, again, we are dealing with probabilities, and as such there final possibility is a total correction of the initial move down from January 20 to form a double top before the major resumption occurs.  This is certainly the least likely of scenarios to play out but cannot be ruled out as an option.

The markets are still basically moving in tandem, with stocks and gold rallying in sync and falling in sync, indicative of a similar psychology towards all assets and as such, putting each at a similar level of risk for near term declines.
Once the bear market resumes it should hit fast and hard and wipe out this recent retracement in a matter of a few days.
Best of Luck!
Derek.
Posted by Derek 40 comments