In my last forecast I wrote that the highest probability was that the Dow would push to new highs before rolling over.  The ideal scenario called for a burst above the rising trend line followed by a quick reversal, which would kick-start a resumption of the larger-degree bear trend.

While the upper trend line was still over 80 points from being breached, the market behavior still met the psychological criteria - a sharp drop on Aug 6th, followed by a solid upward swing that sucked a large number of players in who had watched the same thing happen to smaller degrees the previous few trading days.

This was followed by an immediate reversal, with 2 trading hours wiping out the previou 7 1/2 of hard-wrought gains.  Today's 250+ point hammer-down in the Dow, with the market barely able to pick itself up at all during the whole trading session, indicates that there is a high probability the game has changed, and we have reversed trend.

To add strength to this thesis, the USD put in 3 up-days, with today being an extremely strong move, wiping out the previous 9 trading days of losses.  These moves are sharp, scary, and leave financial analysts scratching their heads as the only news has been the Fed's return to QE and moderate caution regarding the economy - but shouldn't, according to faulty cause-effect market models, QE mean that stocks will go up?  Stocks rise when money is free, right?  Inflationists are hopping about, saying "this is gold's ticket to the stars", and "inflation, inflation, here we come!".  And yet..... 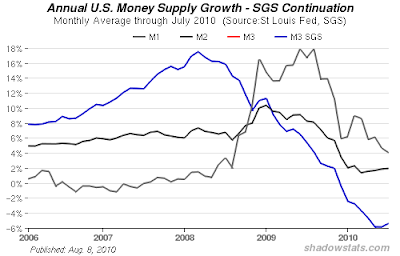 M3 is currently contracting at its fastest pace since the 1930's
This is actually a huge fallacy as history will show that, more often than not, stocks rise as interest rates climb - but that is a study for another time.  Here is the market update for August 11, 2010:

This is a weekly chart of the Dow running to today's close.  Notice that the April high was an almost perfect .618 retracement of the entire first bear leg from Oct 2007 to March 2009.

This hourly bar shows that the Dow has decisively broken down from the bearish rising wedge pattern.  Momentum continuously slowed and, while hype and "phew, it's over" became more prevalent, this market rolled over and has caught most by surprise.

Notice that this current correction, the same bearish sequence as the one showed above on the weekly Dow chart - although two degrees smaller - retraced to only 10 points above the .618 before rolling over.  An ideal retracement target, this leaves huge bearish potential for the next several months, and we should see the Dow take a haircut of at least 2,500 points.

Further techincal evidence for a change in trend is a weekly reversal bar, which today's downswing has formed.  Even if the market manages to eke out a 200 point rally from this point through Friday's close, the bar is intact.  It will take a huge burst of bullish activity to erase the potential for a bearish turning point, something for which the odds are fairly low.

The only other reversal bar, either bearish or bullish, in the past 18 months is the April 2010 market top - the Dow subsequently lost 1600 points.  Since this stage is the "majority in" part of the move, whereby the majority is on with the trend, we should see a larger loss in percentage and point terms.

Gold, since I forecasted a top in late November, is virtually net sideways from that point.  Gold should begin to roll over more quickly with the rest of "risk assets".  I will be watching it closely.  The nonconfirmation between Gold and Silver going back to March 2008 (and even further back to 1980) still stands, and gives weight to the bearish case for both metals.

Momentum has continued to wane just as hype and general acceptance has grown.  The recent high in gold saw similar participation on the futures to the March 2008 high.  A decline of similar or even slightly greater magnitude is in the works and should provide gold bugs who aren't too disenchanted the chance to pick up the metal much much cheaper.

Our oil trade still stands, and it appears that oil is rolling over into a larger stage of decline.  This should take oil somewhere into the $50.00's per barrel and possibly even lower.  Our final target for oil is below the fall 2008 low. 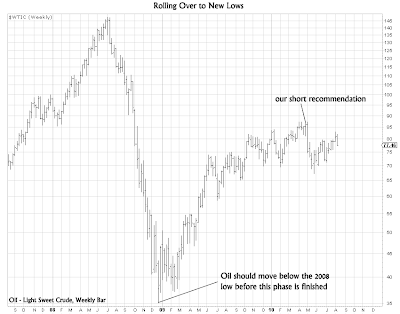 Best of luck.  If I don't get to doing an update before the weekend, enjoy it!  Get outside and take advantage of the summer - only 5 weeks left until fall arrives.
Derek.
Posted by Derek 4 comments