The Spec Trend is Still Intact!

Back on September 14th, Investophoria forecast the following:

"...this is what we can expect over the short term"

One month later, here is where we stand:

Bullish sentiment on the Major US indices is still well over 90% according to the Daily Sentiment Index (Trade-Futures.com). 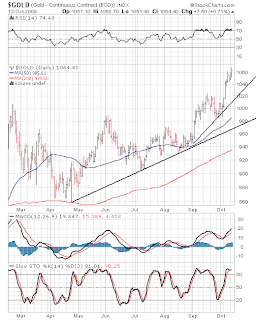 Gold has smashed through the $1000 / oz barrier and has been making so many new all-time highs that reporters are just copy-pasting their previous articles and changing the timestamp.  Overnight trading last night saw the metal just shy of the $1070 mark.  RSI is extremely overextended, and roughly 50% of the current gold futures market is in speculative (non-commercial) net-long positions.  Sentiment on gold is also in the hyper-extension range.

The dollar has continued to lose ground, making an 12-month low.  Sentiment against the dollar is 90% bearish.

Speculative investments are on the rise, as a return to the 2007 mentality of IPO's and Corporate merger/buyouts being the major driver of the economy.

I don't know about you guys, but I have at least one conversation per day with someone who tells me how much money they made on Bank of America or Citigroup and that I should be buying.  To say that they look at me like some fuzzy alien when I tell them I am 80% cash and 20% LEAPS is a huge understatement.

Commodities seem to have become the new real estate.  Do you know anyone who would dare say that commodities are a bad investment right now?  They are few and far between.  Even those who were right about the first leg of deleveraging and asset losses are proclaiming themselves bullish on all things that hurt when you drop them on your foot.  While I am long term bullish on commodities, many of them are going to suffer a very serious setback mid-term.

Bond yields are exactly where they were on Sept 14, currently trading at 340 basis points for the 10 year.  But hey, seven out of eight ain't bad!

And now to the meat and bones of the deal.  Where are we headed from here?

From a pure probability side of things, every day that this rally runs up higher and higher, the odds of a major shift in long-term sentiment are growing.  Sentiment levels are at the same heights as during the market top in 2007.  This is the most dangerous environment to be long almost anything that I have seen in a very long time.

But.  The trend is still rockin' along! 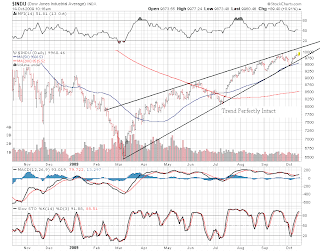 The various news outlets and market pundits are all calling for Dow 10,000.  Funny enough, even though the market gapped up to 9977 this morning, I am not sure if we will make it there.  Everyone has their eyes keenly set on this target, and often times such a speculative rally exhausts itself just prior to the obvious and most-sought price targets.

Then again, I could be wrong.  In then end, it comes down to this.  I cannot say with 100% certainty where this market is headed.

However, I can say with 100% conviction that the odds are highly stacked and piling on for a Wave 3 decline to start any time now.  And I can say with 100% conviction that I am sleeping soundly knowing my longs are closed out and I am ready not only to profit from the decline but to be waiting at the bottom, cash in hand, for the no-holds-barred fire sale.

I wonder how many other buyers will be there with me?