If you haven't seen them yet here is an excellent video posted on Youtube a few days ago - it's already had over 50,000 hits since its release. Send this to your friends so they can see...

Enjoy Folks! And make sure you have a nice portion of your long term portfolio in commodity producers and in oil, gold, and silver.
Posted by Derek 0 comments

Quick Update on Positions and Food for Thought

Happy Canada Day! Markets closed up here in the North for the holiday. US Markets were fairly lightly traded and the Dow ended the day up 53 points despite the fact that economic numbers are not getting better.

Barring the fact that government manipulates almost every statistic it measure and publishes, such as the use of "hedonics" in GDP, and the "birth-death" model in unemployment, I think these statistics will be some time in turning around.

Here's a chart that should make you shake in your seat, courtesy of the folks over at the Mises Institute. 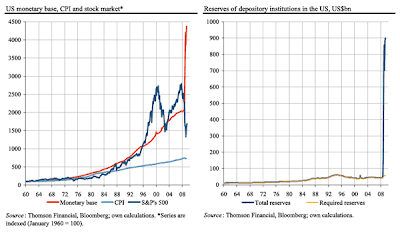 Also an excerpt from Mises "The Theory of Money and Credit" I also came across when reading through a blog posted by Thorsten Polleit.

"A government always finds itself obliged to resort to inflationary measures when it cannot negotiate loans and dare not levy taxes, because it has reason to fear that it will forfeit approval of the policy it is following if it reveals too soon the financial and general economic consequences of that policy. Thus inflation becomes the most important psychological resource of any economic policy whose consequences have to be concealed; and so in this sense it can be called an instrument of unpopular, i.e. of anti-democratic, policy, since by misleading public opinion it makes possible the continued existence of a system of government that would have no hope of the consent of the people if the circumstances were clearly laid before them. That is the political function of inflation. It explains why inflation has always been an important resource of policies of war and revolution and why we also find it in the service of socialism. When governments do not think it necessary to accommodate their expenditure to their revenue and arrogate to themselves the right of making up the deficit by issuing notes, their ideology is merely a disguised absolutism."

As usual Mises is able to deliver the point both beautifully and concisely - if you read Austrian Economic literature it always has the clear ring of truth at its core. Reading Keynesian, I always say, is like reading a mish-mash of mythology and fable (if Disney wrote math textbooks!) iced up with a thick gooey layer of egotism and topped off with utterable contempt for a free person's right and ability to choose what to do with their own resources.

Sounds great, eh? Give the statist economic literature a read and let me know if you don't agree!

So on to other things.

As I posted recently I am looking at taking out a position in OPTI. As I said in my last post about them I figured there would be some short term bad news that might drop the stock and was waiting for a technical indicator. A few days back they diluted their shares a huge chunk more as their cash-burn rate will most definitely be coming up higher than expected and production will be below desired benchmarks for this quarter.

Long term, though, I think this is just another hiccup. If OPTI can still maintain the rights their technology for Bitumen processing the company has a great future. The stock has dropped down to roughly 45% of what it was when I was interested, at around $1.90 at yesterday's close.

What does tomorrow bring? I'm not entirely sure. But a few years out we are looking at a sweet deal for much of the Oil Sands. as T. Boone Pickens said recently "All the cheap oil left to get has been gotten". We will be seeing the price of crude tracking higher as the ridiculous inflation the governments of the world have created finally translates into higher prices and higher interest rates. As this is happening, and as oil projects pumping out cheap oil are shut down due to lack of viability (many major sources are almost fully tapped right now), the next cheapest source will be the oil sands. After that we are looking at some serious off-shore drilling, especially around South America.

Bottom line: If they can hold on to their extraction technology rights and license them to other projects they will do well. If not I'll avoid this stock and look for another Oilsands company that has low debt and current production.


As for an update on Uranium One. The price is roughly where we were last time I posted, at $2.66. I had a few more emails regarding this company and I will repeat what I sent back here: Uranium One is far below NAV, their production number are definitely going to be higher this quarter than anticipated, and the deals with Japan and Russia should go through by the end of the year. For a quick trade we are up a full $1.00 per share on the initial buy and $.16 per share on the secondary.

But I think this puppy will be breaking out of this heavy heavy consolidated range within the next 2-3 weeks. I am guessing to the downside as most stocks tend to trade with the fundamentals of the company first, and the market second. An overall increase in commodity prices should see the TSX trending higher even though I'm expecting a good worldwide stock crash in the fall sometime.

Most likely this will occur with the full nationalization (i.e. complete bankruptcy not allowed by the bastard interventionalist government) of Citi or Bank of America or one of the big boys. Kind of like last fall.....

Anyway, another company I am very interested in is Migao Corporation, trade on the TSX under the symbol MGO. They produce potash fertilizer in China.

Why am I interested in these guys? I am expecting a pretty severe food shortage in China and India over the next several years due to lack of available credit for fertilizer in the current market. Crop yields will be down very much driving food prices higher, not to mention inflation adding some Nitrous Oxide to the gas tank. Farming will be a very good business to be in and I strongly suggest finding some good food producers in China, India, or Brazil as well as companies that sell fertilizers, pesticides/herbicides, and equipment manufacturers.

Migao is a smaller company, allowing them quicker adaptability in this climate (I am always a fan of small caps versus large as their growth levels are much higher - 5% scale-back by a huge competitor could equal 50% market share gain for the small guys). Not to mention they have a nice looking balance sheet with debt coming in at just a little over 55% of cash levels. They are profitable, and have been for over 3 years with mid double-digit earnings growth all the while.

Oh yeah! I forgot the biggest reason I'm into the Potash play! Especially where China is concerned. Quite simply, China only produces about 12% of the Potash that it uses. It has to import the rest.

This is extremely advantageous for the domestic producers as they can mark their prices to a bit less than the imported stuff (where loading the stuff onto ships and carting across the ocean and than paying import taxes is priced in) to entice a quick buy-up of their stock. This makes their margins a lot better than the competition, making them very nice cash-churning machines that offer a high potential for solid returns.

Currently they are above NAV. I am waiting for an opportunity to buy them below this level as there are still a lot of snags in Chinese banking that will probably drag down the country's financials (they bought A LOT of securitized American Debt that hasn't really been written down yet), and send at least one more good shock wave through the Chinese indices and stocks.

Not to mention it looks like a weak technical sell going by the charts. I'm waiting for a good turning signal and I will be taking out a position of at least 1,000 shares when I see it.

Check them out and let me know if you like them, or if you think there are any alternatives to the China potash play. (btw Potash Corp. here in Canada is very overvalued at these levels. If it gets hammered down enough I will look at it as an addition in the future).