For any of you who have taken the UUU.to (Uranium One) trade with me, today was an even happier day than Friday. Not only are we now above the EMA's, we are also above the special resistance point that has acted as a million-ton rock hat for the stock.

Even better, on the weekly chart going back a year, we are still following along the uptrend established back in November almost perfectly. The fundamentals of the company are improving as well, with record production levels, new interested parties in the company, and lower costs despite those production increases. While most companies will be announcing an increase in profit strictly due to "Cost-cutting" measures, UUU.to will be announcing theirs based on an aggressive expansion of their business.

See what I mean: 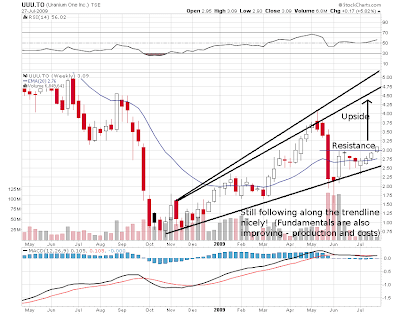 And now to balance out with something not so happy.... come on, you knew it was coming.

Insider selling since May 1st has been roughly $4 Billion dollars, versus buying which has been around $350 Million. This leaves a net insider activity of NEGATIVE $3,650,000,000.00 in the last 3 months.

This is usually a pretty good indication of future company performance. I mean, come on. If the guys running the company and seeing the day to day operations are selling the rally, should you - the guy or girl on the outside looking in - be buying in their place??

And there's also this (okay I lied. I'm not exactly balanced out now.)

Remember the Dot-Com bubble and how free market economists said that stocks were at wildly unsustainable multiples? Remember the "new economy" guys talking about how earnings didn't matter (just like we are hearing deficits don't matter and debt doesn't matter from the public sector now)? Remember how, especially in the latter part of the bubble, most of the insiders of these fly-by companies were massive net sellers?

Boy, that chart makes it look like those crazy internet days were about as action packed as a 75+ lawn-bowl-athon. (not that I have anything against lawn bowling. Or 75-Plus-ers either). But wow have we hit the twilight zone or what?

Hang on to your hats folks. I have no idea what the market in terms of dollars is going to do over the short or even medium term. We might never see another lower-low again if this moneybomb works its way into spending hands quickly enough. Hell, we might see Dow 25,000! But I'm betting if you price that stuff in gold and silver.... well, I'm sure you get the idea.

For your Viewing Pleasure...

I know, I know... a few of my blog posts may have seemed depressing in the last while (it's tough to smile when you are staring into a soon-to-be-true economic black hole, after all). So I thought I'd lighten things up a bit with some happy news on the Libertarian and economic freedom front.


If you haven't seen this speech, you must. Tom Woods is both a great author (I've read a few of his books - Meltdown is a particularly nice read. If you want a one-source breakdown of why we're in the mess and where we're headed from here, check it out!), and a great public speaker. It's nice to hear such a fired up Libertarian crowd!


Anyway, here's a video from May 22. Tom Woods did a fantastic speech at the Campaign for Liberty conference in Seattle.


And here are the videos... for your viewing pleaseure :)