Last article I covered the philosophy of gold and why that itself must change in the mind of the general public before we can see a real bull market.  The arguments are here, and though the angry gold-bug letters calling for $10,000 / oz gold in 6 months continue to pour in, I have also received a few "hmmm, I never looked at this gold bull market like that before" emails which puts a smile on my face.

After all, at Investophoria we aren't just into helping ourselves, but educating would-be and professional investors alike with the "other side of the trade".

And so, this brings us to today's topic.  Denial and speculation.

I subscribe to several precious metals newsletters, some weekly and some monthly.  For me, they are not so much a means of getting precious metals advice, as they are to see what the mind of the avid gold investor is surmising at any given point in the market cycle.

The last several letters that I have received have given me pause - each from a different type of investor (one in speculative juniors and mid-cap producers, one in futures, one physical-only) they have all touched on the idea of speculation in gold and - in their own way - tried to debunk such a claim.

This is of course funny considering the money for both types of speculation generally comes from the same or very similar sources.  In fact, even in the simplest of picture terms we can see that paper speculation and NOT a philosophical shift towards gold is occurring. 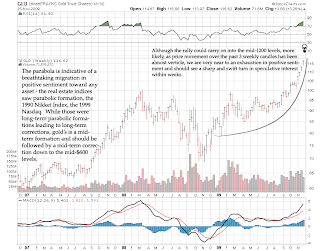 The parabola can be seen in any bubble in investor psychology going all the way back to the late 1600's Amsterdam Tulip Bulb Craze right up until today.  Most of my readers are familiar with these bubble-chart-formations so I will not dwell on them long.

My question is, however, for gold bugs - why is it that when we see this picture on any other asset it is called a "bubble", and yet when it is in precious metals it is "as it should be"?

I mentioned that similar price action in real estate occurred in the previous recession compared to gold in this one.  The mass-migration of money into real estate, and the subsequent bubble in real estate prices certainly felt good to someone.

These "someones" I will call Real-Estate-Bugs - those people who all your life said "real estate is the best investment" and "you can't lose with a house" long long long before everyone and their uncle was saying these things in the mid-2000's.  Those guys could walk around with puffed out chests and smiles of good-old-fashioned pride at the proof of their intelligence.

Until things got a little out of hand.

Right now these long-term gold bugs who bought and held at $850 in the 1980's (and are still down over $1000 inflation adjusted dollars) are starting to feel some vindication.  All those things they said are coming true!  They are finally proven right, after so many long long years.  And while the psychology in gold is obviously not even close to the extremes in real estate (we are much earlier in the gold bull-market than real estate in the 2000s), it is still there nonetheless.

This is not the real bull market in gold, folks.  The majority of money pumping into gold is going in for investment purposes, not for savings purposes.  These people are expecting to MAKE money, not HAVE money, and until this mentality towards gold is shaken and the speculators scurry off to lick their wounds and throw their chips on another table, this bull market is not real.

There is one thing I make very clear to my clients right off the hop.  There is a very specific criteria for investing that only a few investors actually take into account (to their peril).  Most investors think that buying an asset is investing - anything that is not cash is an "investment" if you expect it to go up in value.

In my mind that is entirely false, and is indicative of the times in which we live in terms of the long term (100 years or so) cycle in investor psychology, social progress, and attitudes towards money.

What is an investment, then?  I have said this many times before and I will say it again - An investment is an asset whose primary goal is to generate an income from the expended capital used to acquire it.  A yield.  Cashflow.

What good is "investing" if the only return you hope to get is that someone down the line is will to pay more for what you paid today?  Certainly, I take a valuation approach to buying assets, but the motivation is not to simply buy something on the cheap for the fact it is cheap - the main reason for this is because if the asset is undervalued, the yield is undervalued as well.  If XYZ Inc.'s stock drops 50% with the market but their earnings and payout stay the same, the yield has gone up 100%.

No, dear readers, gold is not an investment.  We have covered this before as well - it is a non-yielding asset.  To me, when someone says they are investing in gold, it is the same as saying they are "investing" in a house.  A house is a non-yielding asset unless you rent it out.  So many bought 2 and 3 homes with the hope that somewhere down the line, someone would be willing to pay more for them.  That is not investing, that is speculation.  If these homes were purchased for the purpose of renting them and generating an income, and the capital appreciation was secondary, THAT is investing - most of the homes built and bought since 2003 were certainly not purchased for income!

As such this money pouring into gold is currently speculative.  Very little of it is for the true purpose of gold, which is to have money itself.  When a hedge fund buys gold, do you think it is because they are interested in owning real money and tangible savings?  Of course not!  They are buying it because it was the only asset to not get completely clobbered when the rest of their holdings were getting torched.  They are buying because their investors are demanding it!

So what am I saying?  That gold is in a huge bubble?  Absolutely not - the amount of money that has entered the gold market is tiny compared to the other speculative assets.  However, gold is not supposed to be a speculative asset - it is money.

What we at Investophoria are saying is that gold will resume the largest part of its bull-market within the next few years.  However, this bull market will occur once again when gold is out-of-favor with most investors and quietly increase in value as people continue to use it as a savings vehicle.  Thankfully, unlike an un-yielding house, it also costs little to nothing to keep gold which will encourage its use for savings over most existing assets.

But first the correction must come - the other side of the parabola, where these hedge funds and profit chasers who are usually the last to the party get shaken off the gold-train.  Make no mistake, folks - once this correction has occurred we are buyers of gold - and more importantly, silver - en masse, and the bulk of our cash savings will be converted into metals savings.

Until that time, in the very least, try to recognize these price movements as patters of psychology - which, in the end, is all that determines the price of any asset.  Use this as an objective picture to see what the mentality behind gold really is - after all, we can argue arbitrary points like over-the-counter botique gold bar sales and the fact that I find at least one article on gold on almost every mainstream investment site I visit until we are blue in the face.  Price is not subjectively inclined to one side or the other - it is what it is.  And we can use that to find out not only "what it is" but "where it is headed".


Gold's day is coming soon enough, but that day is most certainly not yet.

P.S. In case you don't remember, we made a prediction back on September 14 of the top of this rally hitting 1,132 on the S&P500, and offered a fairly compelling chart to illustrate.  We are within inches of this market topping point, and suggest moving entirely to cash if you haven't already - or, if you are so inclined, to a fully-short position.  Also, check out some of the other predictions in this article and see how we've stacked up! 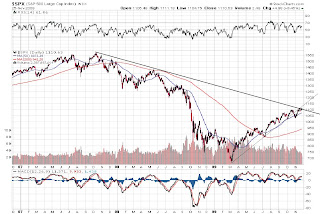