Peter Schiff's moneybomb has just begun and already he has raised $479,000.00 from private citizen donations!! If you live in the US and are sick of government poisoning the market and private businesses, donate for this excellent Austrian Economist in his Senate run, and donate to Rand Paul's campaign as well.

Let's look back in time a couple of weeks. Remember I wrote a short while back about how it looked like the S&P 500 was going to complete (and fall down through the neckline of) a beautiful looking head and shoulders.

Remember I also said that if you had shorts in that you want to place your stops around the top of the head, and that if the market manages to close above the head line, that usually signals a reverse of trend and a new upward movement?

Well let's see what the market ended up doing..... 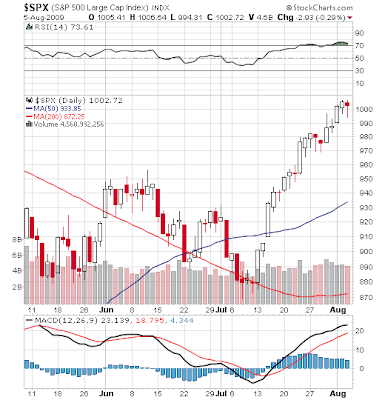 Hmmm.... not trying to toot my own horn or anything, but it looks to me like the S&P is running along exactly as predicted. IF (and this is a big if for most traders/investors as the psychology of a nice-looking head and shoulders pattern is pretty compelling) you were to take long positions at the top of the head and hold until today, you would be up roughly 6.3% in just a few short weeks.

The idea is to be impartial about markets, because they will do exactly what they will, and there is nothing you or I can do to change that.

So even though I know that the fundamentals of the underlying companies and economy that this index represents are getting worse and worse by the day, I also know that markets can be more irrational than anything else in the short term. But there are a few things that have popped up in the last few weeks that to me seem to signal the possible end of the rally in the near future (My personal feeling is within about 2 months the top will be in for a long long time). 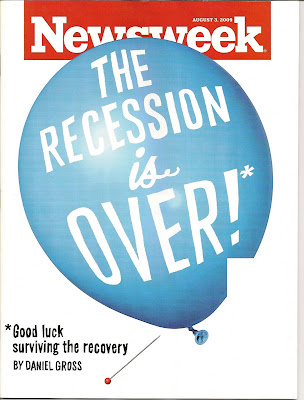 I will give you an example of why this is a hugely top-defining moment and why this should make you pretty scared about the whole "Green Shoots" jargon being spit out by the talking heads out there.

Anybody remember this?? I personally am too young to remember this, but I can tell you there are sure a lot of people alive today who do. It was over a decade into the vicious Stagflation Bear Market that rocked the nation and skyrocketed unemployment. BusinessWeek is a "reputable" business magazine that covers the economy and such. But they are mainstream media. And if we as traders know anything about mainstream media it's that they are usually the LAST to the party.

This is what happened to the Equities Market after BusinessWeek claimed that they were "dead". 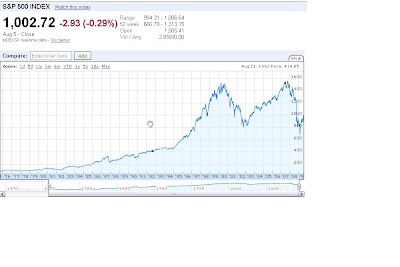 Bang On, weren't they!

So this is just a word of advice. When the entire crowd is running toward something, it might be time to look over their shoulders and see exactly what they are leaving behind. Might be some opportunity there. Or a whole lot of it.

As to some of my soon-to-be purchased picks, I have picked out ideal targets for Hangfeng Evergreen Inc and Migao Corporation for plays on the upcoming massive Agri-boom across the world.

I am looking to scoop up both of these for below their Net Asset Value (The price per share of the value of all company assets minus debt not accounting for future earnings or growth). This is a good idea for all long-term investors because you are basically getting the company for a cheaper price than it is actually worth at market value.

It's also a good idea for investing in Small Cap stocks because generally if they get bought out they get bought out at a premium. The cheaper the price you pay versus the assets they hold, the more cash or converted stock you will end up with at the end of the day.

(See Silverstone Resources - now owned by Silver Wheaton - which we made over 400% on and got to convert to Silver Wheaton shares as an added bonus!)

So here are the numbers I have crunched. Keep in mind that any time a stock is far off NAV it will eventually return to it. So if you are looking to short or buy puts, find a stock that people are paying way too much for (they will eventually wise up). If you are looking to go long, look for a stock that people are selling for way to little (because they will definitely wise up too).

NAV is $5.35 / share. And Check Out this Revenue Growth! Now that is a thing of beauty :)
So far the revenue they have clocked in for this year is over 35% higher than comparable quarters this year. Will the share price go down in the short term? I absolutely think (and hope) so, along with the broad markets.

Will we be getting a solid company with demonstrable profits, decent insider ownership, revenue growth, and a business model that operates within a fundamentally sound and improving industry and country?

Migao's NAV is sitting at just under $6.00 per share. They are currently trading at $7.95 which is certainly steep for me. Also phenomenal cash-flow and revenue growth for several years running.

Remember that the secondary beauty of these companies is that somewhere down the road they will be great buyout targets for larger companies looking to expand their market share and regions of operation. Will keep you updated on these every now and again.

CDE closed today at a new high since the reverse split of $16.00 per share ($1.60 per share pre-split, making our $.62 cent purchase grow with a 158% return in 8 short months!). This one still has a long ways to go fundamentally as it is still trading to a discount of NAV by over 35%. The fundamentals of silver itself have not been better in a very long time and I encourage you all to keep accumulating small positions of the physical metals to offset the rabid insanity of our interventionalist governments.

That is one decision you will not regret. Own a few producers, too, outside the USA as we may just see a resurrection of FDR's "Illegal to own bullion so we can confiscate it for cheap, devalue the currency to enable our spending, then sell it back to you for the new price of almost 100% more" program.

On another note, Peter Schiff seems to be pretty serious about running for Senate, and Rand Paul also seems to be making some headway. We need more of these guys in government all around the world, and I suggest if you live in the US you make some kind of a pledge to their campaigns. They are huge underdogs in these races and it will not only take grassroots awakening but the aid of grassroots donations to beat out the corrupt, croney career politicians in seats right now.

All the best guys!