Update on UUU, Opti, the coming Agri-Boom and US Treasuries


It's not that I'm a conspiracy theorist - I just pay attention to events that coincide beautifully with each other. Generally when these events cause certain parties to gain monumentally and other parties to lose just as much or more, these sort of "conspiracies" catch my attention.

The recent rally has been one. I think I've mentioned this a few times, but it's a funny coincidence that the majority of major banks' Trading Divisions open market exposure (measured in
Add the sprinkling of upgrading each other's stocks and we are where we are today. The coincidence is the perfectly timed offering of Brand New Shares to the public. The companies sell them off either to pre-designated parties or in a special offering underwritten by a securities company (also tossing each other some financial bones in this way). So these banks (JP Morgan, Goldman, Capital One, Bank of America, etc etc) get the benefit of offering these shares at much much higher prices.

Meaning they don't have to offer nearly as many as they would have a few months ago. Meaning that the executives holding shares of these companies are not diluting their holdings nearly as much. Tack another one on for "the Good 'Ol Boys" as far as I'm concerned.

Here's the even bigger one in this picture - the sheer magnitude of contracts on the major indexes in the last 30 - 60 minutes of trading in the last 3 months has been staggering. It's like every day when the market was rallying it stalled out and started to reverse - but lo and behold! A giant money-bomb comes along and drives up the price. For those of you who have not heard of it, I introduce you to the "Plunge Protection Team" (the Federal Reserve, Treasury, and a few other Government Organizations).

I mean who else has about $20 or $30 Billion or so to just toss at the markets every day for 8 weeks? That's a LOT of billions! (Makes you wonder about that $1 Trillion plus expansion of the Fed's balance sheet, doesn't it. That balance sheet that we are forbidden by backhanded law to ever know anything about... I for one and thankful for True American Heroes and HR1207.

On the flip side of this equation, opposite the mega-banks, you have the US Government / Federal Reserve. Boy are they in a pickle!

They are running a current national deficit of roughly $1.8 Trillion dollars - that is about $6500 in debt THIS YEAR ALONE for every Man, Woman, and Child in the entire US! Back in December - February they were loving the fact the market was crashing - despite adamantly stating the opposite.

Why is that, you might ask? Simple. Market crashes cause people to panic. When people panic they run their money to the safest possible places they can think of. Currently (though not for too much longer, methinks!) United States Treasury Bonds are perceived as being about the safest place for your cash. So safe in fact that 10 year Bonds were down to a 2% yield and for a short while the shorter term bonds had a NEGATIVE interest rate. That's how freaked out people were - they were PAYING to take a small loss on their money so they wouldn't take a bigger one elsewhere. Crazy times or what!?

But now that the market has recovered some in this dead cat bounce, a little belly-rumbling for risk has returned to the broad market. Money is moving away from treasuries and into all sorts of other things. The fact that the Fed is currently monetizing the debt (printing the money from thin air to give to the gov't in exchange for the bond paper) because there aren't enough buyers to purchase this $1.9 Trillion is certainly not helping.

Bond prices move opposite the direction of the yield. If the yield goes up it signifies higher risk or a surplus of the debt relative to demand for it. Buyers want more bang for their buck in terms of interest income because of this. The Federal Reserve has for the last couple of months been buying up the excess treasuries on the bond auctions to keep demand high so the yields stay low. Yet even with this effort yields are still moving up pretty briskly.

I'm not going to get into the whole inflation debate right now because it is inevitable (just look at a CPI chart for the last 100 years and hold it up next to a money supply chart... hmmm....), and because it is for another day.

All I will say is that when the market crashed, yields were way way way down. This means it is a lot cheaper for the government to service the debt (even 1% more interest on $1.9 Trillion is $19 Billion per year!). When the market goes up, treasuries lose their luster, and yields go up to attract investment. It is 100% more expensive for the government to service the debt they sell today than the debt they sold 5 months ago.

Bottom line is this: The government NEEDS the market to crash again. The banks have had their little shenanegans with new offerings to stoke their capital base. Now it's time for the other side the coin to face up. It's like these guys are lobbing softballs at each other, back and forth. Unfortunately these softballs amount to highly probably default by the world's largest government on it's debt obligations, massive inflation, huge unemployment, and an excruciatingly long drawn out Depression that could last a decade.

Hopefully that cheered you up!

But there is hope. Because hyperinflation causes huge huge price distortions in the marketplace. Everything gets crazy expensive. And because EVERYTHING is expensive, nobody can afford ANYTHING - so, when nobody can afford to spend their money because it can't buy much, that money goes into one of two places

Oil will go up not only as a hedge against inflation but also because people will still need heat in the winter. Natural gas is an even better play as a broad sector as it is more oriented to this type of use and also is much cheaper compared to historical levels than oil.

Commodities in general will do very very well. Mostly because many of them are staple items people need to live, and secondly because they are a natural hedge against a free-falling currency.

This is where trades like OPTI and Uranium One can become long-term opportunities. The fundamentals of these types of companies are only getting better as much of their competition has to shut their doors because they have too much debt. This is opening up market share that, even though OVERALL market demand is shrinking, supply is shrinking faster!

The next step is for the government to implement price controls on various items, which they always end up trying to do in inflation scenarios. This of course causes prices to actually go much HIGHER than they would have, because it makes production un-profitable, therefore shrinking supply. If supply shrinks and demand even just stays the same, what do you think is the result? You can play around with accounting books, and loan formulas, and debt and monetization of assets, but YOU CAN NOT CHANGE the laws of supply and demand.

I personally have two favorite places to be in right now. Agriculture and Water Treatment. Mostly I am interested in companies that do these things in China. I have a couple of Agriculture (fertilizer producers) that produce for the Chinese market, which I think are fantastic long term holdings. They are both listed on the TSX.

This company trades for around $6.25 / share right now. Trailing P/E is 10 at these prices, and sales are on part to beat 2008. Not too many American companies that can say that, are there?

I will be buying 1,000 shares within the next 30 days. I will follow up with my entry point and my reasons for picking that spot.

These guys produce Potash fertilizer in China. They are also profitable, have a Debt/Equity ratio of less than 0.2 (5 times as much equity in the company as debt). Their sales have TRIPLED in the last 12 months, and they are trading at a touch over $8 per share.

I will be purchasing 2000 shares of this company within the next 30 days. I am waiting for a good entry point to appear. I will also post my entry and technical reasoning once I have taken the trade.

I'd suggest you take a look at these two companies and play the upcoming migration of money into agriculture. Food output is expected to be down somewhere in the low double-digits in terms of percent for this year. Probably more next year. It's because farmers currently cannot get financing to buy fertilizer! Lack of supply causes prices to skyrocket for those who have cash and can produce. Much to gain!

I will get back to you in the next few days about a couple of Asian water-treatment investments that have a double-or-better your money type of potential.

Update on Uranium One

This stock is apparently a hot one to bring up as I have had a couple of people post questions on the blog and several emails regarding why I chose this particular trade.

Quite simply, it is because of this: 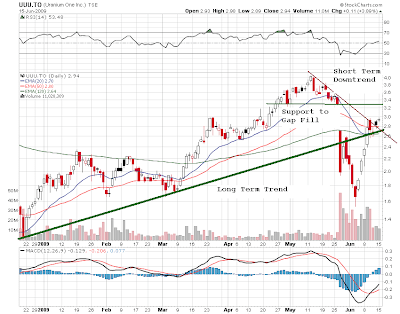 The long term trend (higher highs despite the lower market lows in March and this one-off panic sell) is still intact. In fact the stock has broken above the long - term trend line and closed above ALL exponential moving averages (20, 50, 120 EMA's).

The MAC-D is looking good with a nice buy signal being flashed. So in my books this is actually a sweet buy signal. But since this stock is volatile and I'm also not particularly keen on where the broad market as a whole is headed for the next 6 - 12 months or so, I have some tight following stops moving along with the price.

I'm about 5% of the movement range of the last few days (the big jumps on the consolidation), which puts my current stop-out point at $2.51. It will follow the stock at around a $.45 range behind the upward movement.

And here's a look without those nasty lines to blemish it. What a beauty, eh?! We're sitting above all the EMAs. And in a few days it looks like the 20-day will be back on top of the 50 day, and hopefully acting as a nice launching point for the stock in the near future. 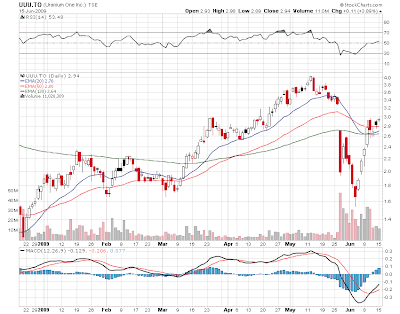 Anyway I hope this answers your questions. Feel free to keep asking - And if you have any ideas for stocks or commodity plays or anything else out there fire them my way and I'll post my two cents on it.

P.S. Don't forget to sing up for email updates when I put up new posts. Due to the nature of some of my trades the window of entry opportunity can be limited to an hour or less sometimes - if you feel like coming along for the ride this is an easy way to get the trade first!