All right, so just a quick few notes. I am still working on part 3 of the ultimate buy. In the mean time I'll just post a few positions I recently took.

I haven't really covered stock options to this point for any of my readers out there, but I will do a segment on them in the next month or two as I am planning on trading them pretty heavily on a <90 day contract basis, due to the high volatility out there I'm looking to leverage my gains without having to extend as much capital as taking the same size position as in ordinary stock.

Anyway... I digress. Here's a few positions I have taken over the last sis weeks. These are all still open positions and I will let you know when I close them off. Some are down some are up, some are for fundamental, long-term reasons and other are for trading purposes.

That's it for now. Others to come.

The one I want to focus most on is JPM - the reason I took out puts at $15.00 for the third friday of March expiration is because I think there is a decent chance the stock will make it down that far.

Looking at the Put side of the table here, current puts at or around the real stock price trade at a premium of about $3.00 per share for the march contracts. This is after a few days of upward movement, as well, which generally will mute the premium for the opposite trend on the short term.

But I think JPMorgan has a fine chance of reaching new lows within 6 weeks. Here's why:

No matter how you look at it they are still in the iron grip of a heavy bear trend, complete with huge false rallies and crushing reversals to follow. The 50 day Moving Average (the average price of the last 50 trading days, for those who don't know what a MA is) has acted as an inpenatrible ceiling for the last few months and I don't think this particular rally is going to be any different.

In fact as we have seen on most Bailout announcements the tendency is to buy the rumor and sell the news.

But the big thing for me? March is when the Fed starts buying up treasuries of its own (kind of like writing a cheque to yourself from an account that says zero and cashing it) which will cause huge debasement of the USD. This will crush JPM's balance sheet as they are very very heavy treasuries and their value will collapse as soon as this plays out. This will inevitably hurt the stock. Not to mention they just raised guidance for defaults on loans by ONE HUNDRED PERCENT. It will get worse as well.

So if I can get down to even $16.00 or so on a huge selloff over a week or two, my 20 contracts which cost me around $900 USD after commissions could very well turn into a tidy $3000 - $4000. However if the trade continually runs against me I have set a stop at a 50% loss on the options and I will sell them off on the market early. Risk a little for a decent sized reward.

So here's the chart for JPM - let me know if you think I've got a chance :) 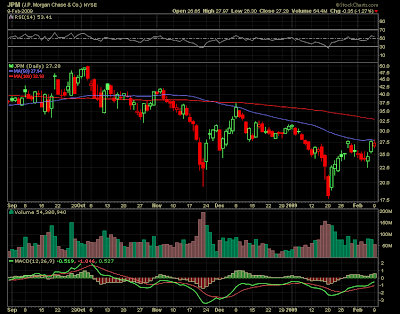