Mastercard will net us 500% or more!!! The US Treasury era is ending, and The Death of the Dollar.

Okay, so I still have some open positions and I've done a few trades that I don't think I have posted lately.

PST (ultrashort 7-10 year treasuries) has begun it's move up. It just hit the 200-day moving average. It has made a new high out of the huge drop a few months back when the Fed officially announced it would be monetizing Treasury Debt. This is the beginning of the end of the "bond bubble" that has been brewing beneath all the other bubbles for at least 2 decades now.

I suggest anyone interested in making a lot of money should buy the January '10 in the money Call Options for PST and watch this monster unfold. They are trading at about 4.50 right now but I can easily see PST hitting $65.00 to $70.00 by then if not more, netting you roughly $10.00 - $15.00 on your $4.50 spent. It could go even higher - it's hard to say but there is going to be extreme carnage in the bond market over the next few years and PST is one of the best ways to profit from it.

I have just opened up a new trade as of Thursday. Put options against Mastercard. They are October $140.00 Puts purchased at $7.35. The long term trend is looking very very ugly for MA and the fundamentals are looking even worse. Latest news is that JPM is moving a $59 Billion portfolio over to Visa so MA will be losing a significant chunk of transaction revenue. Not to mention that Net Asset Value on Mastercard is around $5 Billion and the Stock is trading over $20 Billion - 75% downside potential.

Here's a chart to show you what I mean: 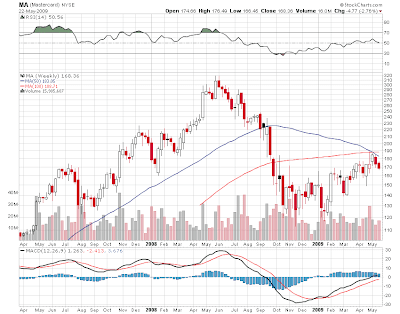 The 50-week Moving Average is clearly in strong down-trend mode and the 50-week has JUST crossed UNDER the 100-week. A very very strong sign of long-term price weakness, sometimes referred to as a "black cross" or a "death cross" - get the picture? lol.

Just how low will it go? It's tough to say. But you can bet that this company will be a hell of a lot cheaper than it is now. And for good reason - the market seems to be currently pricing in a fairly low level of card default rates (keep in mind that unsecured debts like credit cards are wiped out when someone declares bankruptcy, so the company ends up with $0). But the default rates are assuredly going to be coming in much much higher than anticipated meaning huge portfolio writedowns and huge losses for MA.

My current price target in the time frame is $120.00 for the stock by September, which is when I plan to sell the options so I still get a time premium (For those of you unfamiliar with Options, check out This Link as a primer on what an Option Contract is. This trade is medium-term and should net a return of about 600% - 700%. I am trying to keep my USD positions to a minimum as the USD just closed below the 80 handle in the Index, which has been HUGE support for the last 6 or 7 months. In 10 years I doubt the dollar will even exist anymore! The Treasury is unloading $168 BILLION of bonds this week so I expect PST to be a lot higher by Friday. The of course will not be able to find adequate buyers for this grossly obscene amount of debt and thus the Federal Reserve will have to monetize it (i.e. print dollars from thin air to buy them. This will further debase the dollar and cause it's value to deteriorate drastically).

To all holding US$ in savings my only advice is if you need cash savings convert it to a commodity based currency like the Australian $ or the New Zealand Kiwi or the Canadian $ - I wrote a couple of posts called "The Ultimate Buy" a few months back, and one side effect of the commodity and agriculture shortages we will be facing in a few years is the currencies that have a high percentage of their economies dedicated to these things will be worth a lot more than high-debt currencies like the USD or the Pound.

Anyway, happy investing and trading all! There are still a lot of cheap companies out there, you just generally have to look overseas (Asia, Brazil, Canada, Australia, Singapore, Hong Kong, some India, etc) to find them. Best of fortune to everyone!
Posted by Derek