Another Thursday in market land.  The Asian markets (excluding Japan) overnight were hammered.  Currently the Dow is sitting at -44 points. Gold has dumped back down below the $1000 / oz mark to $998.

At 10:30 this morning I clicked over to Google Finance's home page and came across something pretty hilarious:

Two headlines, one after the other. 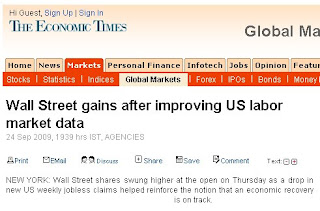 This goes back to the same thing I have been saying for some time now.  Newswires are probably the least helpful resource for figuring out market activity.  Traditional reporting tries to push fundamental data onto market behavior - this only works some of the time.  The even worse part is that no matter which way they spin the movement-to-data correlation, to the average reader is sucked in because they make it sound plausible.

This is why technical analysis is so very important.  Realizing that the markets are just a massive collective of people trying to assign subjective value to various assets makes you realize that fundamentals are very slightly involved.

In fact, I think it is more viable that the OPPOSITE correlation/causation effect can be applied to markets.  It is more likely that the overall psychology and mood of the markets are what drive fundamentals.

I know that is a bold statement.  However, look at a few recent examples in history to see what I mean.

During the wild upswing in earnings-less company share prices in the late nineties, where were the fundamentals?  Nobody cared about the true equity of shareholders, the actions of management, prospects for future revenue, even dividends!

In fact, it was significantly after the market topped out and crashed that these companies started going bust.  In the year following the market top, another 200+ companies entered the market and successfully IPO'd their stocks to the general public.  It wasn't until much of the market losses were realized that people remembered dividends and real products and services.

A good example of this type of psychology is Enron - the stock started to decline months before any issues over the fundamental soundness of the company and the fraud of its earnings came up.  It is more likely arguable that it was the declining stock price that caused shareholders to become more fundamentally concerned - A constantly rising asset price causes complacency - nobody really cares while they are making money.  However, a declining stock price causes investors to ask "why" and start looking critically at the asset they are holding.  THAT is where the cracks actually start to show.

The Banking Sector and Subsequent Crash

The same sort of scenario applies to the financial sector during the housing boom.  When share prices were jet-packing it higher, nobody cared about what the banks were doing - nobody thought about their equity to exposure levels, the quality of loans they were issuing, the recycling of debt into securities, the appraising practices coupled with mortgage insurance.  Nobody cared.  In the words of Citigroup's then-CEO, Charles Prince, "We're Still Dancing".


But the market formed a top in late 2007.  After that point, during the steady decline, people started to question the fundamentals, they started to wonder just how much trouble these banks were really in.  When the picture became apparent, the market subsequently tanked.

Many folks argue that the Merrill Lynch failure in 2009 was the cause of the market crash.  However, empirical evidence argues against that - Merrill crashed on Sept the 9.  The market actually rallied UP for a few days, held relatively flat for a week, then began a huge decline. 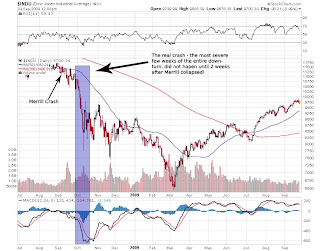 So, you ask yourself.  "What does this have to do with markets today?"

We are back to a similar type of mindset that existed at the 2007 market top.  A smaller group of stocks are advancing while the rest of the market is stagnant.  Currently, on some days, Bank of America, Citigroup, and AIG make up a HUGE portion of daily volume - this points to the more speculative nature of today's investors.  Speculation is a high-probability sign of top-forming activity.  Banks are repackaging mortgages again, even securitizing life insurance!  People don't care about the fundamentals at this point, they care about making back those losses from last year, wherever they can.

"If that means buying a stock with NEGATIVE common shareholder equity, then so be it!"

Keep that in mind when you are deciding whether to get into or out of the markets - many retail investors base their activity on these sorts of data, and this is only asking to have your money destroyed.  Someone else's interpretation of markets with a data correlation slapped on there is not going to help you in the least.  Do you own research, learn some technical analysis so you aren't left wondering "why did the market do that when that good announcement came out?".

As soon as the markets begin to turn again, the mood will shift toward underlying fundamentals yet again, and will turn negative once people start paying attention.  This is the point where the next and largest leg down in the market will take place.

The economy is in worse shape than it was at the market bottom - if the market ALWAYS traded on fundamentals it would be much lower.  However the market doesn't work on that basis.  It's people and money and all of their dreams and desires and greed and fear.

There's a little too much greed in the air and not enough fear for me to suggest being long any stock right now.

Stay sharp out there!