A (Bearish) Technicality of Silver

Don't get me wrong: I love silver - I have for as long as I can remember.  There is just something about the oft-mystically-mentioned white metal that attracts me.  Maybe I hate vampires (that new Twilight craze certainly hasn't added any vampire merit points), or maybe I just like high electrical conductivity and a pure looking luster.

There isn't really one single thing about silver that I like the most - but there is one thing about it that I don't like very much of late.

Silver is far too expensive.

Now, before you fly into a flurry of arguments about how "silver is real money" and debt denominated instruments are "worthless pieces of paper" (which is actually untrue because they are not only worthless, they are of negative worth, because they are debt), and how it is one of - if not the - most widely used metals in the world and demand for its application can only go up as the developing world's middle classes emerge and demand more electronics and such....

Before you say any of that, you have to understand what "expensive" is.

Or relative strictly in dollar terms.  Sometimes something is simply expensive all on its own.  Now again this is in perspective - when I say it is expensive I could be saying "it takes too much of my labor or free resources to acquire an ounce of silver."  That is certainly part of it.

But the other part is that it is expensive when you measure it in terms of market psychology.  In terms of market psychology silver is very overpriced - not too say that people aren't buying, because they are (reading the latest C.O.T. report  should give you an idea.  You can view it HERE. - specifically, grab the number of weekly open contracts, chart them and do an overlay with the price of continuous contract.  Surprise surprise!)

One little study I did on silver recently was using RSI divergence from price.  I have used this before (our short recommendation on AIG using RSI and Money Flow), to some success.  This is of course not my primary piece of data used to determine silver is starting a multi-month downtrend that should make a lower low than October 2008, but its another piece of the puzzle that I have kept track of and is fairly compelling.


Here's an example of what I mean: 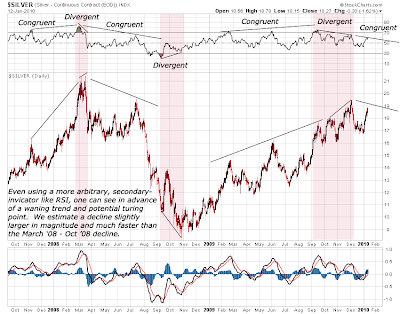 Silver has experienced a fairly large period of both RSI and MACD diverging from the price movements - as prices went higher and higher, both of these strength indicators steadily declined. Now that the uptrend has been broken with conviction, we should see a much faster and further fall in silver prices than we did in '08.

Lucky for me, I have thought silver was too expensive for some time now (seeing as we are in a period of deflation, no matter how people clamor at the utterly temporary uselessness of the Fed's money-printing and say it is immediately grounds for silver to go to $50.00 / oz and gold to $3,000.00).

As such, the strategy is to accumulate a hefty batch of  "worthless" FRN's which I plan to exchange for said real money once silver has found a bottom.  One of the indicators I will be looking at to indicate a good buying opportunity for the precious metal is a solid price/divergence in RSI and MACD.

Best of luck and be safe in the cold weather.  While your teeth are chattering away, be consoled in this little tidbit of information...