The Big One Could Finally Be Here.....

This week, we are witnessing something that should become fairly "as usual" over the coming months:  Broad based price declines in virtually every major asset except the USD.

But here's the interesting thing - finally, after 5 weeks of watching gold top and begin its bear market decline, and the major stock indexes make new highs, we might have just witnessed the turning point in all "risk assets".

And that is really one of the keys, and one thing we have been saying for several months now.   Whenever the precious metals are treated as risk assets for the purposes of capital gains, they are not in a bull market but in a false rally.  The psychology that drives this sort of rally is hope-based, completely mood-driven, and ultimately comes unwound like the thread in a poorly knit sweater.

What we are looking for, here at Investophoria, is despair.  Until we see such a thing in the precious metals we cannot recommend buying them.  If we did without it, we would be advising you to get in line and be "the sucker" who is willing to pay a higher price.  Being dedicated to a philosophy is one thing (i.e. Gold = economic freedom and real possibility for growth), but being blindly glued to an asset of any kind will leave you wondering "how could this happen?" when the psychology unwinds around you.

Our position on metals stays the same - gold is in a shorter-term bear market than silver and should bottom long before the white metal.  We are hoping to have a subscription letter available for when that time comes so that our subscribers will be the first to know when to convert those USDs back into the real money.

The other thing of note (which is far more broad-based in terms of effect) is that it looks like maybe, just maybe, the major indexes have put in their all-time high for this bear market rally.  Perhaps more than a simple "maybe", as the probability of that scenario just increased again this morning. 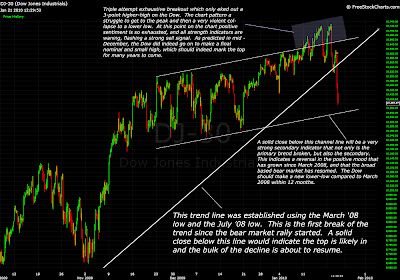 All things considered, the Dow has followed our forecasts very well thus far and we feel that the safest bet for conservative investors is to close out all long positions and hold cash - for the more experienced traders and investors, a maximum leveraged short position with a stop set about 30 points above where the minor channel line and major trend line cross is an excellent trading opportunity.

I have received several emails from readers this morning who were absolutely shocked at the declines in precious metals over the past several days - as I said in my last silver article, there were several great opportunities to sell your silver stocks and paper positions at >$18.75 over three trading days.  Those who did not take that opportunity will be hard pressed to find another good exit opportunity above $15.00 / oz.

The next leg down in both gold and silver should be very fast and will take many more by surprise who have run to them seeking to make back the losses they sustained in stocks in the last bear-market leg.  If you have been following my recommendations (and actions), you will be able to sit on the sidelines and be at ease, or be in a solid paper short position and earning money while the crowd loses.  A word of warning about short positions - another anticipation we have is that this decline is going to be so broad based and so fast that you may attempt to close it out and receive a message from your brokerage saying they cannot process your transaction due to sheer volume.  Try to find lower-volume (i.e. flat or mild counter-trend) days to exit positions as the probability of having your transaction processed will be highest.  Make sure you are trading with a broker who has the appropriate facilities to accommodate such scenarios.

Again, I will re-iterate our big-picture position.  We are in a deflationary era.  As such anything based on credit or its availability will first and foremost be pommeled.  There is absolutely no safe place to hide except in cash or its nearest equivalents.  All assets in all classes are going to lose value - some more and some less - while cash increases its purchasing power as total money and its velocity shrink and slow to a crawl.  We are in cash, 20% LEAPS, and watching the action with a feeling of peace.

I wish you all the best.