Every Market for Itself! (Or All for One)

It appears that the short respite from this bear market is coming to a quick close.  As we have forecast for some time, the everything-but-the-USD bear market is underway and as such our goal is to notify you of topping formations, as the bottom is a little further into the future than our crystal ball is willing to tell.

Technically, the Dow looks ready for a solid breakdown to new lows, as does gold.  Silver seems to have already begun its next down-leg, having lost 11% in the last 4 trading days as of the time of this writing.  Gold has begun the larger portion of its bear market decline, which started on Jan 11.  We should see prices somewhere in the mid to low $900's before this portion is completed and we can expect a sizable correction.

For reference, here is a chart with technical labeling. 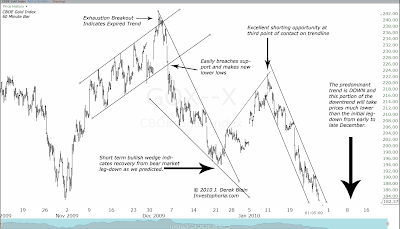 For our thoughts on the Dow, see here: 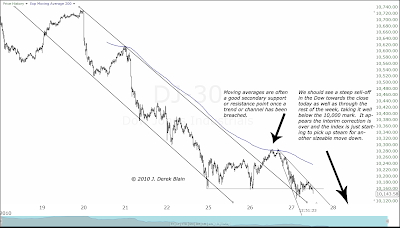 How so many people can argue that "fundamentals" drive the price of any asset at this point in the game is beyond me - or, worse yet, how some can say "stocks are not being fundamentally driven right now and are riding on hope" but "the fundamentals on gold are excellent and the price is going so high it will blow your mind!".

You can't have your cake and eat it too.  When I see headlines such as this:

Folks who argue that "gold goes up during downturns" and then in the next sentence say "the economic recovery is what is making gold prices higher".

Gold Silver and Platinum Fall on Stronger US Dollar

Are you feeling any more enlightened?  I'm certainly not.  The traditional media's means of attaching an external event to a price movement that is purely psychological in nature is laughable at best - and often produces these comical results.

Here at Investophoria we use technical analysis because prices are unbiased - they are simply numbers that reflect past actions.  Certainly, the technician can be biased one way or the other, and we attempt to stay rigidly within the "cool, collected, and detached" category of forecaster.  As such, we can say with conviction that this bear has just taken the first step out of his cave after a long and deep nearly-comatose slumber.

What woke him up?

A bunch of happily cheering market participants who have come to yet again believe that no matter where they put their money, it will always go up "in the long term".

Best of luck all!


What we called for as the highest probability move did not occur today (that's the funny thing about probability, right?), however there are a few things I noticed when I pulled back the chart to a 30 minute bar and put my favorite 50 and 120 day moving averages to action.

One thing that does work in favor of a higher move is the fact that the moving averages are extremely spread apart, which often times will lead to either a sharp correction or a long sideways period - generally when your moving averages are closer together and moving more flat, there is a decent sized breakout brewing.  Just something to keep in mind. 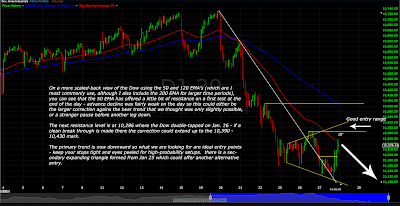 Best of Luck, and keep your heads out there!