Shorting In the Evening

We've been reading some headlines today about Spain's "resilient housing market".  As we've postulated before, much of the European Union is going to be in serious trouble due (in part) to its ultra-centralized monetary planning structure.

Especially effected are and will be the PIGS (look it up).

Greece has already experienced a hammer blow with its sovereign debt downgraded.  The stock market there has taken a hit right along with its government debt.

Spain has a good chance of taking a bullet in the near future - especially in regards to its housing market.  Compared to most other European countries, it's just-under-10% decline has been breezy.  However, these numbers are reflective only of closed transactions and NOT reflective of the fact that most banks are still hoarding all the mortgage paper (and therefore properties) on their balance sheets.  Not marking them down, or selling them.  They are pulling the old wait-for-asset-prices-to-rebound so they can get a better price.

Well, since credit is only marginally less day than the Sahara these days, the odds of such a "natural rebound" are slim to none.  Furthermore, many Spanish banks holding this paper are looking like attractive short opportunities - once the cat is out of the bag the declines should be as fast or faster than 2008's.

Banco Santander (STD on the NYSE)

Overlooking the fact that its stock symbol is certainly not the most pleasant-though-inducing one on the NYSE, there are some factors pointing to overvaluatoin and fast-waning momentum on the upside.

Here's the chart, first and foremost: 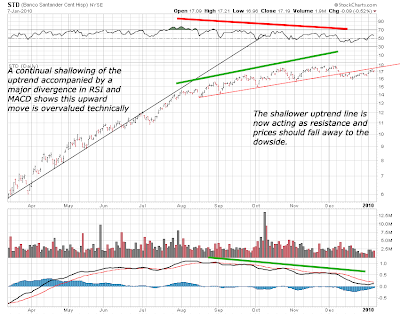 Some other neat facts:

Roughly 1.5x book value on assets that are highly over-inflated (even taking a median home market decline for all of Europe puts the assets of this bank at 15% lower in market prices.) - we suspect their assets to be far less valued than this.

Dividend payout is a whopping 95% of income!   Who needs cash conservation, right?

Current interest coverage -0.66 (yes, negative ), meaning that their cash inflows from operations (not including taxes etc) are not only not enough to cover interest payments, but the must borrow two thirds of their earnings to pay of current creditors.

Not exactly a financially healthy situation.

Given this company's not-too-prudent financial choices of late and the fact they are hoarding bad assets which will only continue to get worse - forcing write-downs - we are happy to plant the Short Sell flag on this Spanish bank.

It's tough to pick a downside target as of now, however the bank is actually in worse shape financially than it was in 2008.  I would say even to move to a semblance of fair book value one could expect a 50% share price loss.  Considering the March low was under $4.00 and this stock's trading over $17.00 right now, we could see a more dramatic move than that.

Either way we are shorting this stock at 50% margin and thus every dollar gained is $1.50 (minus feess).  We'll keep you posted on the trade as it progresses.  We plan on shorting at the open tomorrow unless their is a strong dumb-gap down, which case we will wait for a fill and attempt a short-entry at today's close or just above it.