Curing the Addiction and Acquiring Some Patience


Gold Bugs have a die-hard sense of expectation that is akin to waiting for the Toronto Maple Leafs to win the Stanley Cup (NHL championship).  It just bloody never seems to happen, and though you start the season with some sense of hope, you realize partway through that there’s no friggin’ way it’s going to happen this time.
And yet you cling to that hope, year after year, and before you know it, it’s been 43 years since sweet victory - and the last time there was one, peace and love, long hair and a widespread disdain for the invention commonly known as the razor were a widespread societal phenomena.
Now, gold did not win the Stanley Cup in 1967, nor can I recall it ever picking up a hockey stick in its multi-thousand-year use in human history.  However, it did win a championship, back in 1980 when it made an inflation-adjusted high (based on dec-2009 dollars) of $2,398.14.  Silver fared even better, with an inflation-adjusted-high of $250.00 per ounce.
Gold now sits down roughly 50% from that high, in real terms - its championship run.  And what a run!  That put gold a moon-shot and a half above its previous average purchasing power all the way back to the early 1700’s.  That massive spike in sentiment in which so many people ran to the metals is what many are counting on to propel the price to new nominal highs in the coming months.  I think we’ve covered what that psychology does to the eventual price of assets.
When you ask a gold bug how much gold should be today, you get as many different answers as there are gold bugs, with only one thing in common – “higher than it is today”.

One major mental note to make on this chart is that the price of gold was in a very long-term downtrend for well over 200 years.
This chart is measured in dollars and thus is also representative of a fixed (or relatively fixed) dollar supply, minus certain wartime eras of fiat money accounting for some of those smaller, near-vertical, post-fiat returns to gold.  So what you are actually looking at is essentially a long-term growth in productive capacity of the United States where industrial output and the volume of goods and services was increasing steadily per person.  Thus, money over time could buy more stuff, which is what happens when real money is used.
That wonderful blue box where prices seem to start going zany is about when the good ol’ Federal Reserve stepped into the batting cage to manage the most intrinsic part of any economy – its unit of exchange.
Two things have essentially happened since the Federal Reserve’s Frankenstein-creation in 1913 – the first is that the entire world has been absolutely flooded by US Dollars.  Trillions upon trillions of dollars are out there, all created via some form of debt and given “intrinsic” value by the fact that they are universally accepted and that they are legal tender (claimable in court).
The second is that the massive and continual flooding and increase in money has done what all long-term fractional reserve banking ventures do – they start lending to the good, capital-producing folks first.  Then, when those folks are borrowed up to the hilt, the FRB system turns its sites on individual consumers using mortgages and other forms of credit.  Finally, when the best of those are all lent up to the hilt, the quality of lender decreases again and again, until finally everyone with a first and last name, and being fully clothed, who appears in a bank is given a massive amount of credit-created fiat currency with which to do whatever their hearts desire.
But this process can only go on for so long.  Eventually, the smartest of these folks wise up to the debt burden and, against the wishes of all their “betters” (you know, the demigods in charge of managing the economy), begin to do something that very few of the living have even seen.
They begin to pay off their debt faster than they take out new debt.  The positive psychology towards debt turns negative very quickly.  It usually takes a loss of some kind, say in real estate and stocks, as in the Post-Roaring-20’s era.  People realize that using credit to speculate is dangerous, that paying interest and principal on something worth less than their credit bought for is like contractual slavery.  The first and most savvy of these folks start erasing their debt in earnest.
Meanwhile, the dead, who have lived through deflation before, shake their heads in pity for what is about to unfold.
Just as, on the way up, the rush is to take on as much credit and get into the stock game, or house game, or commercial property game, as soon as possible, the rush is to get the hell out as soon as you can before you’re holding the bag.
That rush has not yet truly begun.  It has been temporarily shimmied into a structure of seeming stability by those economic managers who think they have a chance in hell of stopping the rush.  They don’t.  When the collective market turns on them they will be swept away in the tsunami along with the crowd they are trying to trick into falling asleep. 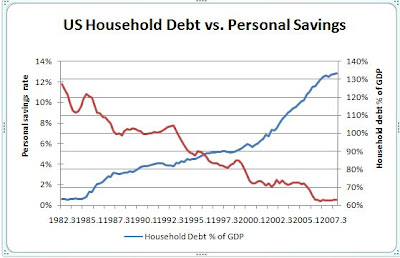 Savings rates will be in the double digits again before this deflationary period is over, a most likely a lot higher than the 12% it was sitting at in 1982.   Household debt’s share of GDP will first skyrocket as economic output decreases (if you discount government spending, which just makes matters worse anyway, it has already skyrocketed), before falling rapidly to a level less than half of where it stands today.
Another reason the Gold Bugs will have to hold out just a little longer to break-even on their 1980 splurge in the PM’s, and that generation long wait for redemption.
People aren’t going to “flee” to gold and silver just yet – you can’t pay off debt in gold and silver, the banks won’t take it.  Try asking your employer to pay you in gold and silver coins instead of dollars – not happening.  And with today’s unemployment numbers the way they are, most people are willing to not only get paid in FRN’s, but far less than they were a few years ago.
No, Gold Bugs, there are still some major hurdles to be overcome before a real return to gold and silver can happen.  The catalyst, to this writer’s eyes, is going to be that point when about as much of that private debt has been paid off and written down, and those malinvestments reallocated, so the only ones left holding the bag are… guess who?
You know it – your friendly, neighborhood “I’m from the government, and I’m here to help!” collective body commonly known as the State.  When the majority is out there and free of the debt shackles, and the State is left with the bulk of the liability, that’s when the people should finally wake up and tell those folks to eat it. 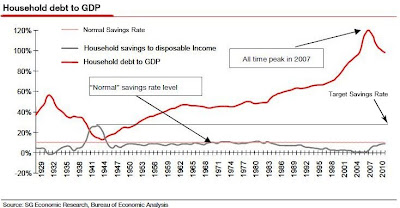 In the meantime, psychology is still extremely elevated toward the metals as a capital gains asset - Psychology that should be unwound along with everything else, so the market can pick its money when the time is right.
And if history tells us anything, there is a good bet that at least one of the PM’s will be waiting nearby to take up that role.
Until then,
Derek Blain
http://www.investophoria.com

Google's Humorous Inflation/Deflation Bias - February 24th
Many of the messages on my site as well as emails sent to me attempt to tell me that, clearly, the vast majority of people are predisposed to the notion that "deflation is coming".  Funny enough, the vast majority of people I talk to are fully aware of what inflation is, and have come to expect it as a regular occurrence (while you and I know that inflation is, always, a monetary phenomena only capable through direction action on the money side of the economy).  Mind you, they don't put it into economic/cause terms in light of total money etc., however they do put it into symptom terms.  Something like this:  "What is inflation?" A:  "Rising Prices".  "What is deflation?" A:  "Falling Prices?"
Deflation is only a natural occurrence in a natural economy using market selected money that cannot be touched by government or any other monopolistic agency.  However, once you have some sort of entity with a monopoly on the issue of money, you automatically get inflation as part of that package - through actual direct action of that entity.
This is what makes deflation such a rare event in modern history - it can only happen when there is far too much money in circulation that has been introduced steadily and to poorer and poorer recipients over time.  Unnatural deflation, what we are about to really see play out, is what happens when all of that bad money - which has blown asset values sky high and decreased productivity per person over time through mis-allocation of resources - gets reallocated, the savings rate skyrockets, and people do not want to spend in the wake of falling prices.
On the note of majority inflationists versus majority deflationists out there I did a quick google search for the following terms:  "inflation", "deflation", "money inflation", "money deflation", "Hyperinflation", and "high deflation" and "hyperdeflation" combined because the term hyperdeflation is not a correct one.
Here are how the results stacked up:
"inflation" - 37,500,000 results
"deflation" - 3,570,000 results
"money inflation" - 23,200,000 results
"money deflation" - 2,080,000 results
"hyperinflation" - 5,810,000 results
"hyperdeflation", and "high deflation" - 2,225,000 results
Total for all inflation terms:    66,510,000 results
Total for all deflation terms:     7,875,000 results
Even funnier, when I typed in "deflation 2010", the suggested terms came up as follows:

I know it's a trivial study but I found it a humorous response to those loudly ringing the inflation bell and saying that theirs is a contrary view.
You would figure more people would be aware of a worried about deflation, since the Federal Reserve sits shaking it its booties at the mere thought of it (and well they should, because they will be powerless to stop it).  And yet, fellows like Larry Kudlow on CNBC have been talking inflation for months now - I especially remember a Peter Schiff interview where Peter was talking up hyperinflation and Larry was nodding vigorously.  They ended up ganging up on a bond trader who thought yields would be below 5% on the 10-year T-Bond for the next couple of years.
People have come to expect inflation as a normal way of life - they are soon to discover that nothing could be further from the truth, as we experience a historical phenomena over the coming years.