It seemed the gold bugs are out in full force over the weekend, calling "the bottom" on the gold price.  We posted a follow-up chart at the end of the day to all those saying that the "high volume" toward Friday's close was indicative of a major turning point.

However, when the rest of the week is put into context, one can clearly see that this is a weak argument at best, and one based on hope.  Gold may experience an upward move from this point on - it was a pretty major psychological barrier that was smashed to get below 1050 in 2 trading days, and a retracement of such a huge move is to be expected. 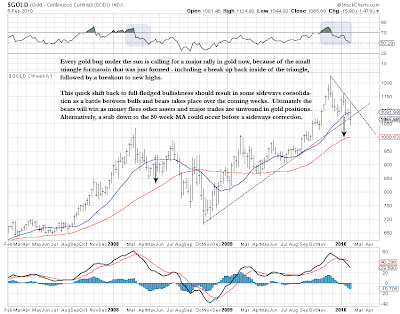 The fact that so many of the "I'm not sure anymore" crowd is clamoring for the best seats on the bull-wagon after a few hours of high volume and a quick bounce off the bottom tells us that the decline in the price of gold is still young.

There's also been a lot of perma-bear accusations thrown our way regarding gold - when we've only been bearish for a few months and our warning flag was up as gold popped through its old record price with ease (in a deflationary environment).  We aren't perma bearish on anything, just as we aren't perma bullish on anything either.  Our job is to take what information the market gives and look at it as a non-participant, scientifically, before making a decision and becoming a participant.

The USD is going up for two reasons - sentiment towards it was never lower for longer, indicating a major reversal, and that this is a net deflationary environment, where total money and demand destruction join forces to do a vicious dance.

But its days are numbered too - all fiat currencies are.  It just so happens that there are others who have been given a less jovial bill of health by the doctor in recent weeks.  We are long the USD because it still stands the strongest chance of survival compared to its peers - most of the world's debt is still denominated in USDs, and the courts will only hear the case if you bring in a contract in USDs - they certainly won't hear you if it is denominated in gold and silver.

This might change in the coming decades - we can only hope ourselves, however in the meantime you invest for what is, not for what you hope to be.

We are short the markets and some individual stocks because there is a double gain to be had - you are essentially a lender who has loaned out shares at an inflated value, and repurchases them at a deflated value. you get the benefit of pre-deflation dollars by going short and having that same amount after the asset value has crashed.  Not only are you a net-gainer in strict digits, you are a net gainer in the purchasing power of those gains as well.

Have a great week everyone!

Stops will be in place for full close-outs if hit for the rest of Today through Thursday as I am leaving my
"modern electronic technology" at home to enjoy some ice-fishing for a few days.  Please submit any questions, suggestions, etc to J_Derek_Blain@hotmail.com, and I will get back to you by the end of the week.

The website is coming along nicely, and we are excited to be able to offer several subscriptions in the near future - we are also excited at the number of requests by people waking up to the real function of markets and wanting to see things through an objective lens.  We'll be happy to offer one, coming soon to a computer screen near you!