This point of of a market is always the hardest to conjecture about.  It is the part that either proves or disproves a thesis - in the short-term, which can be a tough pill to swallow.  However, nobody ever knows will full certainty what the future will bring - only which is more likely than the next.

Not to say we're throwing in the towel, or anything.  But, as I have mentioned on here many times, the goal is to provide objective analysis and we are never fully committed (i.e. blinders) to one side of the trade or the other.  The market will do what the market will do.
There are a couple of things to note this morning, though, which are of key interest in terms of our open individual stock positions, and in terms of the broad markets as a whole.
The first is the VIX.  On Friday, it looked like it exhaustion-gapped down to a higher-low from the previous low made on the 11th of January.  The following is a quick look at where the VIX is, which might indicate where it's going. 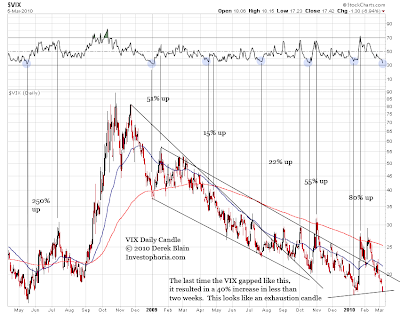 Furthermore, the highest gaining sector in the S&P500 seems to be forming a very nice rising wedge pattern and is in the terminal phases of it.  Might it be possible that the sector that has led the charge both down and up could still have some say over what's going on?

I was considering one possibility for this move (this would be invalidated by a break to new highs, to get that out of the way first thing), which would fit into the psychology of a multi-year bear market and would draw in the maximum number of long participants.  I have made up a chart as to a possibility of what could play out in the next few weeks.
Again, this chart hinges on the next few days bringing a reversal below the January top.  Our stop is still in place just above the January highs.

As for the precious metals and the dollar, I will post an update in the next couple of hours to these charts.  I want to see if there's any telling action today to give any more clues as to the next few weeks of direction.
As for now, the primary direction for the metals still seems to be down, with gold potentially making a run up to $1,162 before turning and silver potentially running to the mid-high $17.00's before doing the same.
Will post my thoughts and charts soon.
Have a great Monday!
Derek.
P.S.  The new site is coming along and every day brings us close to the launch.  Any questions or thoughts feel free to fire an email to:  Derek@Investophoria.com
END OF DAY UPDATE
Markets are still meandering sideways with almost everything consolidating.  This could lead to another breakout to the upside intraday over the next 1-2 days in the major indices.
Gold and silver corrected sharply down, with gold breaking outside of a tight trading range that has held them in lock the past few trading days.  The conviction of this break is, as of yet, not strong enough to assume it will lead anywhere, and could just end up recovering through tomorrow.
Again, there is still potential upside in gold, to the $1,163.00 mark, and in silver to the $17.80 - $18.10 range, even higher if enough of a mini-blow-off builds up.  Here's the chart on GLD which, unfortunately, offers little clarity as to the primary direction for the next 2-3 months.  My gut is that its still down as the corrective pattern failed to make a new countertrend high compared to the first leg of the correction.
However we will have to wait for more information to get a clearer directional pattern.

Tomorrow is going to be a tricky day, because the market could easily do anything we expect and don't expect of it - it could run up 100 points, drop 100 points, or trade flat like today.  Either way its looking like a breakout or breakdown is in the works.

We will see if there are any more solid clues as to where the market is headed tomorrow, and see if the Asian markets do any confirming/leading overnight.
Until then,
Derek.
Posted by Derek