Precious Metals are in a Key Technical Range

Gold and silver are both in a fairly tight consolidated trading range over the past several weeks, keeping both metals bound within a compressed psychological battle between mid-term bulls and mid-term bears.

This range is extremely important, and is probably the largest hurdle that needs to be overcome before a sizeable move to either the upside or the downside.  Our opinion is still that the downside is more probably than the upside, and if the range is broken down it should usher in a move to the $950 area at minimum, with our downside target somewhere around $650.

On the other side of the coin, a break to the upside would make this small multi-week uptrend in gold an impulsive-looking move rather than a corrective one.  This would indicated that there was still a larger degree impulsive move to the upside, which would probably take gold on to new all time USD highs at the $1300 mark or so. 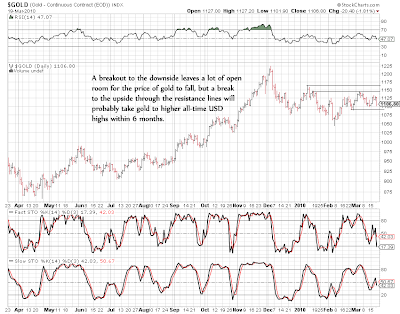 Aside from that, the technicals on gold stocks themselves are looking long-term over-extended, with the Advance Decline level on the XAU hitting a level 75% higher than it has ever in the history of the index, despite the lower-high made in December 2009.  See here:

What's more, we are at what I would call a "very respectable" level of complacency in market investors of every ilk, with fund managers holding less than a 4% cash position at the beginning of 2010 (a record beat only by the market top in 2007 @ 3.6%), and the VIX just recently moving down to what I call the "relax" range.  The RSI reading on the VIX is also extremely oversold, to a level hit only twice previous since 1988 - this in itself is not indicative of an immediate "market crash" or anything, as the VIX can stay "oversold" and have a slowly trending upward price movement momentum against a slowly falling actual value.

But here is the VIX portrait for March 2010:

While we still think downside is the higher-probability in the markets, irrational exuberance and "hope" takes a lot longer to fizzle out than raw fear does to bottom and reverse.

Keep your stops fairly tight out there.