A Minor Top Is Nigh

The Greek "crisis" continues to unfold almost uniformly to our expectations, and its ramifications for the EU as a whole are certainly not painting a rosy picture for the coming decades.

The first order of business is to deal with the still-open STD short.  I picked this bank back in December because it was a mirror of the overall psychology toward the finances of Greece itself, being a mammoth-sized financial institution (relative to Greece's overall economy).  Many readers sent emails and posted comments doubting this choice, and even the severity of the debt crisis that is unfolding.

This debt crisis is not a Greek, PIGS, or Euro problems alone - the entire world is going to soon enter another deflationary cycle after this reflationary pause is complete.  I don't feel there is much time left ticking on the reflation clock.  The market has ridden to exceptional highs, over 7.75% higher than our ideal retracement target of 1132 on the S&P500 (at its recent highest peak).  A very respectable opportunity to close out open long positions is at hand, and I suggest taking advantage of it with at least a large chunk of the core funds you don't want to put at unnecessary risk.

Today's break of recent key support opens the path for another sizable drop in Greek bank stocks, and further tensions in the EU

As for the broad markets as a whole, they are far overdue for at least a minor correction to shake off the extremes in positive sentiment we are seeing today and pull some more chasers into another small leg up.

An ideal retracement point on the Dow is around 10,800 before another leg up.  That being said, most are expecting at least another leg up, so there is a chance that a more major top is in the could erase 1/3 or more of the rally since March '09. 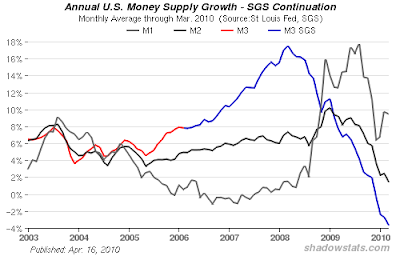 As for the broad markets themselves, some small nonconfirmations of momentum and price could be indicating that larger move down.  Coupled with sentiment levels this is not a healthy stock market to be long in for the short term.  Once a small correction has occurred we will re-assess the situation and see where we can expect another minor leg up or more downside.  If the next day brings an immediate push down, the case for further downside is strengthened as this weeks bar would be a reversal bar (

The precious metals run-up seems to be drawing to an end.  The HUI hit the Fibonacci .618 retracement of the first larger down-move from December 2009.  It could not maintain a close above, and turned down in the last hour.   The initial ideal target has been met to mark the correction complete, however one final push up and a new high in 4 days would mark it complete in price target range and time as well.

One further piece of evidence that this move is corrective and not part of a larger trend up is that the slope of the move up is only 54% as strong as the down-move that preceded it.  The impulsive move ahead still seems to be more probably to the downside, and a significant one at that.

The non-confirmation between gold and silver should rectify itself with silver pushing to another final high.  The minimum corrective target at this point is $18.18 with further potential up to $19.00 and slightly above.  If this scenario plays out silver should immediately reverse and rapidly approach a new low for the move below $14.50 / oz

Have a great Thursday and Friday, and enjoy your weekend!

P.S. Comments or Questions?  Email me at derek@investophoria.com
Posted by Derek