The Start of Something [A LIttle] Bigger?

Today should mark the start of a more significant decline in the broad stock markts that should erase 1/3 to 2/3 of the rally up from Feb 5, before making a final leg up to complete the larger degree bear market rally from March 2009.

As I have discussed many times before, the "hope" mentality of previous major market tops will be no less apparent in this move - It will usher in the next major leg down in stocks and other assets.  To underscore that thought, I re-iterate that deflation is the far more worrisome (in terms of real likelihood) scenario in the not-too-distant future, despite CNBC's latest batch of yammering stock-monkeys carrying on about inflation every single day.

The ratio of surveyed bears on the Investor's Intelligence Survey is extremely low (<20%), a rate that generally coincicedes with at least minor market tops.

Another major bearish indicator is the put/call volume ratio, which plummeted to an astronomically low 0.50.  Investors are betting in a huge way on future continuation of a major bull market - they will be sorely dissapointed as this minor correction and final leg-up sucks in as many committed players as possible. 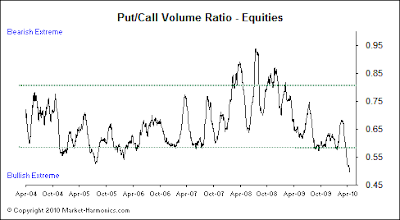 Silver appears to be definitively in a long-term bear market at this point than gold, and has at least one major leg down in price ahead that should take it well below $14.00 - My longer-term target for my favorite metal is still below $8.00.

A break down from this wedge formation and a close below the $16.30 mark will indicate that the next large bear move in silver is underway.

Stay sharp out there!  Today's drop took many committed investors and traders by surprise and should continue to do so for at least a few weeks.