Silver broke to record highs again today, screaming up to another 30-year peak and above the $30.00 / oz mark.

This is where I am going to take the opportunity to hedge against potential losses in the physical holdings I have accumulated for the past 8 years, as well as a great trade setup.

As of this moment, gold has not confirmed silver's high which is a telling sign of massive exhaustion in this rally.  While gold bugs and silver bugs the world over are sure to be proclaiming "this is it!", there is a backdrop of unfettered optimism towards their "sure gains" that raises the warning flag.

There are plent of other factors to consider, including this: 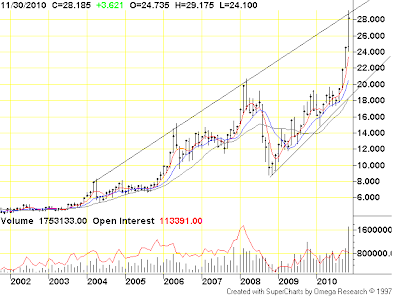 For the uptrend starting in 2001, silver has met this resistance line on 3 previous occassions and suffered declines of at least 30%, and each decline has been larger in percentage terms.  Silver "double-tapped" this resistance line as it shot to new highs two weeks ago.

As a hedge against losses in my physical holdings (I will use the proceeds of this trade to purchase more physical in the future), I am short in the futures market at $29.92.  I have also opened up several options trades on the SLV ETF with April 2011 and June 2011 expirations.

My stop is at $32.25 pending another small spike for a potential total loss of roughly 7.5%, with upside potential of 32%.

Best of luck out there.