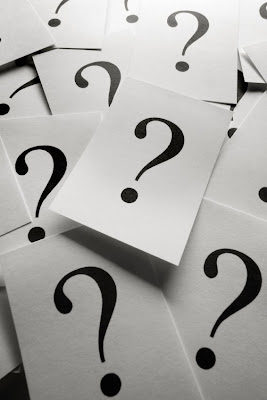 In my last post I wrote about how the major US indexes had broken below the neckline on a strong head-and-shoulders pattern. Generally this indicates a significant move to the downside.

However what we have seen since then is a few earnings "surprises" that have bolstered the markets and caused another run-up in price off of the neckline. Here's a chart to show you what I mean. 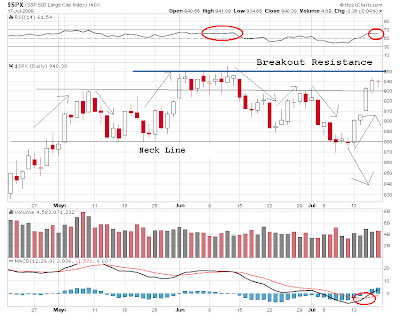 A few points to note:


As I wrote in my last post, a head-and-shoulder is one of the most reliable patterns in trading. But even the most reliable can go against you from time to time. This is why stop-loss points are extremely important in your trading strategy.

A similar situation occurred last in December of 2007 when I first started this blog and was following the price of oil. A nice head and shoulders pattern formed in oil and it looked as though it had room to drop at least $15 - $20 per contract based on previous chart activity.

However even though I took out a position in the Ultrashort Crude ETF, I had a tight stop at the head line of the pattern. I also wrote that if a head and shoulders pattern is able to break through the top of the head line definitively that generally a new uptrend has been formed and you are better served to take out a long position instead of holding a short that could run very far against you.

The lesson here is that as a trader you should first trade with the overall fundamentals of the economy. But you need to maintain a rational approach and never favor one side or the other of a trade except based on hard evidence that is presented to you by your charts and data.

Currently I am very very bearish on the US economy (which I'm sure if you've read even a couple of my posts you can tell). But the market is not always as prescient as people believe and can often be skewed mid-term by a wrong shift in psychology. Just look to the housing bubble and the dot-com bubble.

But the market IS efficient long term and does price in realities and will hit NAV at some point. The technicals will be your guide as to when that is about to happen but if you can play a swing trade against your core gut belief because everyone else is high on euphoria, then play the evidence.

Remember that is is often more an effective and rigid system of trading and execution that make the few money-makers in the market. The only time to pay attention to your emotions is to realize that your emotions are part of the larger group of suckers out there and that if your emotions are telling you one thing and your head is telling you the other, trade with your head. The stronger those emotions are pulling at you, the bigger chance you have of making a highly profitable trade by ignoring them.

Happy investing all. Remember to keep a core position of hard assets and companies that deal in them. The US government just surpassed the $1 Trillion mark in deficit and there is most likely at least another $1 Trillion to go THIS YEAR. This money is not generated through savings but printed by the Federal Reserve, and is debasing your cash savings minute by minute. Protect your wealth.
Posted by Derek