Head and Shoulders Pattern in the S&P500

It looks like the next down-leg for the broad market might be starting its launch. Just in time for 2Q earnings, where I suspect we will have some nasty surprises.

A fairly clear head-and-shoulders patter has been formed and the market has closed below the neckline. Now is a good point to start lining up your short positions. Also note the EMA's, which look to be soon lining up for downtrend order and should offer some strong resistance on the way down.

Remember from one of my earlier posts that the good place to put your stop-loss on a head and shoulders is at the top of the right shoulder. If the market is able to get to that point there is a decent chance of a strong upswing.

Do I think this is one of those cases? Honestly, no. There is a lot of rot on the economic vine that is being sprayed with Febreeze by the governments and central banks around the world. It is not and has not been cut off. Just like a plant with dead husks still attached will not grow properly no matter how much fertilizer you dump on it, the same goes for a broad economy.

I personally am trading with the following in mind: We will continue to see lower lows in the broad market until either something massively positive happens or until the (currently) inevitable worst-case plays out.

That positive thing: Government needs to GET OUT of economics entirely as 1000 guys centrally planning the daily decisions and well-being of 300 million people just does not make sense. Government continues to siphon off resources to be used UNproductively, while the market is attempting to work its creative destructive magic.

If the government gets out - we will probably see one large and violent crash as the hugely insolvent banks' assets are liquidated and the market reallocates the tidal wave of malinvestment currently locked away from productive uses by the Federal Reserve and Government.

But the stock market can still go up! Long term Helicopter Ben seems willing to dump as much paper on these problems as he can print. Eventually this will create a tsunami of inflation which will cause all asset prices to rise, just not as quickly as basic necessities will rise in price.

But anyway, the chart you've all been waiting for :) 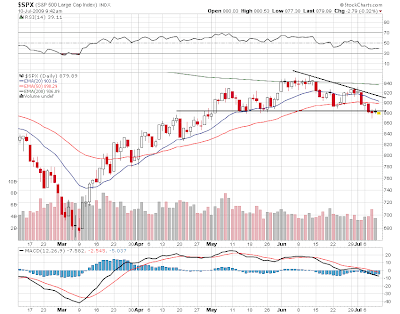 Also to note, Silver Prices are down around $12.50 right now, which is RIDICULOUSLY CHEAP on a historical basis. I am accumulating continuous physical silver bullion at any price under $15.00 / oz - this just makes me smile!