The Implications of Sky-High Gold and Why you Shouldn't Wish for It....

There is an interesting point to be taken from the barrage of gold-related articles and videos on the net these days (I freely admit that, yes, I have made my fair share of contributions).

Gold bugs and gold investors are hyped up and jumping (or were when gold was breaking $1000 - I don't know what they are doing right now.  Probably sleeping.).  Many of my readers, who agree with me philosophically on gold, disagree with me on its mid-term future price movement in terms of the dollar.

I realized something today at lunch.

The arguments are vicious on both sides (although it's a bit drafty on my side of the room these days).
In the end those philosophical beliefs completely negate the whole concept of dollar terms when it comes to quantifying its value.  Furthermore any gold bug out there should really think twice before seriously wishing the suffering of $10,000 or $20,000 / oz Gold on us.

Why? - you might ask
.
It's fairly simple.  First, in a market sense, gold is still treated as money - real money with real value.  A good example - offsetting huge increases in money supply and total credit following the dot-com bubble-bursting of 1999.  Money supply increased exponentially as Mr. Greenspan (a long line of Federal Reserve chiefs helping bring the loathsome organization to where the fault-lines are exposed - and to finally receives [not enough] rage from the public for causing the boom bust cycles we have suffered through) flooded the market with cheap debt.

In nominal (Dollar-measured) terms, the GDP of the US improved at a fairly decent rate.  Although through this era, the rate of growth was actually slower than in the lower-credit, higher-interest-rate era preceding it.  This exemplifies another point regarding how a debt-based (vs. saving/producing) economy actually deteriorates itself from within.  But that is for another post.

In nominal terms the broad markets climbed to new all-time highs (excluding the Nasdaq which was in the center of the bubble, and therefore had to - still has to - retreat to its pre-bubble era lows).  However, when measuring the Dow Jones Industrials in terms of ounces of gold, one can see something interesting.

I know, I know.  Gold bugs the world over are yawning.  We've seen this this many times before.  Yes, you have - you and me both.

But there's a point to be made here.  You already know that too - gold is money.  Gold is money in terms of the amount of assets you can get for it, the amount of goods and services you can exchange an ounce of the good stuff for.

So in the end, it really doesn't matter what the DOLLAR price of gold is.  in market terms, whether dollars or gold or soybeans or oil or GE shares, all things are a constantly fluctuating supply/demand/sentiment/emotion equation whose variables change with each participant and each second of the trading day.  In fact, the ONLY thing that matters is the when, not the what.  As in, when did you guy your gold?

But in terms of practical purchasing power - an ounce of gold bought you a really good full outfit (suit), a high-quality belt, and an excellent pair of leather sandals in the Roman Empire.  No matter how they inflated (mixed it with other lower-grade metals to lower the purity) it.  You can get about the same for an ounce of gold today.  Actually it would be argued that you can get MORE today and that is only because the amount of goods and services available per human has certainly risen in relation to the amount of gold per human over the last 2 millennium.

To call for $10,000 price in dollars for gold is suicide.  Sadly, we may very well end up there.  But that is not the trouble for today.  And even more troubling still is that the only way to STOP that from happening is for people to take action today and put men like Ron Paul and other Libertarians into office to actually represent the best interests of the people;  leaving them well-enough alone.

But here is why the gold-bug hopes and dreams are masochistic at best.

In order for there to be $10,000 gold today that would mean that the dollar would have to lose 90% of its value in relation to gold from here.

Think about that for a second.  You own gold.  You actually wish for that to happen?

Here's the funny thing about hyperinflation.  Or even very high inflation.  Things do not go smoothly in such conditions.  Money is spent and shuffled around much faster because nobody knows how much it will be able to buy tomorrow.  This only exaggerates the problem, but it is secondary to the main point.
Another interesting thing that happens in high and hyper-inflation is that the disparities in the value of assets widen and widen the worse the inflation is.

The more liquid an asset is (easily transferred to or able to act as money), the closer its value matches inversely to that of the underlying currency being inflated.  In other words, the easier a product moves, the closer it stays to its real value in terms of purchasing power.

So here's the part that should be scaring gold-bugs out there. 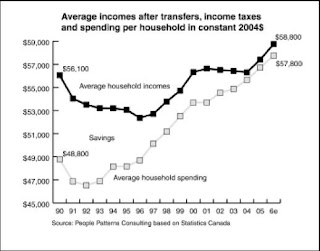 Now.  Couple that with this:

What's the end result of this latest mad-cycle in credit expansion?

Consumers have negative net equity on average.  Savings rates are going up but most of that is going to pay down debt.  Otherwise, most "equity" is in illiquid assets like cars, houses, appliances, and consumer goods.

Very little of this equity or "wealth" is in cash.

Sure, gold bugs will argue that they aren't like these dopey sheeple who got sucked into the FNR pump-up session.  They continued to save and continued to buy gold.

But I'm sure you have family that didn't.  Or friends.  And if/when a massive wave of inflation does slam and fracture the foundations of the dollar, those assets are going to go up in value a lot slower than the dollars are dropping.  That little bit of gold they might have will not last them very long.

In Weimer Germany, during the wickedest routs of hyperinflation, gold's purchasing power went up 5-10x in value compared to normal times.  It was not only ultimately liquid, it was stable - they can't print a billion of ounces of the stuff, now can they.

But how many people do you know who have all their savings - I mean ALL - in gold or silver?  All their non-yielding assets.  That is the context I spoke of earlier.  The only way this can benefit anyone on earth is if ALL of their holdings are in something that is immediately liquid, and static in value (only precious metals, especially gold and silver, meet this criteria).

I know not a single person who can fit this category.  And if I did, I would most certainly call that person insane.

So, in the end, whatever percentage of your savings/investments are in gold and gold related products (ETFs, producer's stock, leveraged futures, et al), you had better hope beyond hope that if the scenario gold bugs are clamoring for never comes to pass.  You'd better hope that people wake up to Liberty and realize how beneficial for society it truly is to let the market pick the money.  Hard money.  Real money.

Because if we ever see this moonshot we all talk about, we'd better home that percentage of gold and silver we hold is more than enough to feed our families and clothe them and shelter them.  Our wages aren't going to do us much good at that point.

I guess, in the end, the moral of the story is:

Be careful what you wish for....

See you later this week.