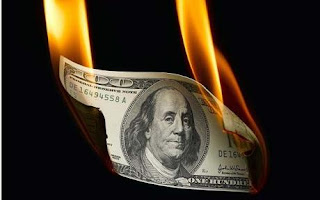 During these days of Dazing and Confusion, there are two polar-opposite arguments for the near and mid-term future of the US Dollar.

On the one hand:

Is This the Death of the Dollar?

Protecting Yourself Against the US Dollar Collapse

Is the Dollar Going Down Forever?

Deleveraging Pushes the Dollar Up

And that's about all I could find by typing in "US dollar going up" in Google that is recent and credible.  Otherwise you'll find mostly Ask Yahoo! questions like "is the US Dollar going up or down?"

Which goes to illustrate a point that I have been trying to get across for some time, but is secondary for this particular article:  Almost everyone out there has bought into the "Death of the Dollar" scenario.  There are very very few left on my side of the trade.  (Which is why I'm there, remember?)

Tonight, however, I'm not going to focus on  the particular direction the US dollar is going, more on - hypothetically speaking - what both sides of the argument are saying will happen to the interest rates on loans.  Specifically I am going to focus on Treasury Bonds.


The Commonly Cited "Fact" - Interest Rates are determined at treasury bond auctions based on the risk of inflation or deflation.

This is the general arguments and banter that one will hear when reading mainstream financial news or commentary, listening to the usual economists discuss economic policy, and virtually any other place where Treasury rates are discussed.

Unfortunately this is a partially false assumption, as this aspect of interest rates is actually only a part of the real reason interest rates rise and fall. The usual argument for Treasury bond rates is a far cry from the truth.

I am going to explain to you why I expect BOTH rapid and violent deflation AND higher interest rates in the mid-term, guided specifically by treasury bond yields.


The first factor we have to consider in bond interest rates is general supply and demand.  This is the oldest of economic principles and applies not only to potatoes and cars and oil, but to currencies as well.  By issuing a bond, the government is increasing demand for actual dollars, taking from the supply of existing dollars and trading them for a piece of paper that says they will repay them plus interest at a pre-designated future date.  While the Fed is monetizing a large portion of these, the foreign buyer market has still made up a significant portion of the Treasury purchasing crowd.  One of the largest ever, actually.

The second factor we have to look at is a result of the first factor.  As demand increases and supply contracts, the overall value of the dollar actually increases relative to the goods and services in the economy.  This is the result of deflation (shrinking amount of total money).  Bonds' interest rates are not only factoring in possible inflation (i.e. return ON money), but are - more importantly - factoring in the ability to repay the debt at all!  (Return OF money).


If the likelihood of principal repaying is very high, the interest rate will be low - buyers are willing to take a lower yield for the security of knowing their principal is going to be returned to them.

However, if there is a good chance that the borrower is going to default on the bond, then the interest rate is going to be higher - there has to be a higher reward for the higher risk.  Hence the fact that junk-bonds from corporations have far higher yields than AAA rated bonds do.

So here is our forecast - we see a high probability of both deflation AND high interest rates within the next 2-3 years (which most traditional analysts will tell you is not how things work - again, ringing the long-term contrarian bell here!)

How is this possible?

It's pretty simple when it comes down to it.  One-paragraph kind of simple:

If the USD rapidly deflates, there will be far less US dollars the government can get (from taxes and such) to repay their bonds with, and thus the risk of default is far higher than during inflationary times when there is more dollars in existence every day.  Thus, even though the dollar is going UP in value and interest rates "should" be low, we expect the bond-market to experience the dawning realization that deflation is what could actually cause governments to default on their debt.  Thus, very high interest rates on Treasury bonds hand-in-hand with rapid deflation!


Our recommendation is as follows:

For the mid-term, cash and short-term treasury bills that can be rolled over easily and withdrawn easily are the optimal means of protecting wealth.  As I said in a recent seminar, "Cash is king, and will soon be proven Emperor".  For more aggressive investors selective shorts or LEAPS can make significant returns on top of the appreciation in the underlying USD.

However, once we see interest rates begin to hike back during the final decline in this market, we recommend switching entirely to cash and being ready to purchase stocks.

A note on gold:  We expect that the bottom of this correction in gold to under $700 will be hit long before this, and that gold will experience a quiet bull-market back up to roughly its current price level around $1,000 - $1,100 per ounce (much the same as its quiet rally from 2001 - 2006.

Once the predicted scenario of rising rates AND a rising dollar unfolds, we expect the real legs of the future rally in precious metals to take off, as a slow trickle of people enter the market realizing that gold is the safest form of money.


That is some food for though - a tidbit to keep in the corner of the mind until the "wall of worry" comes into play again.

Until then, I want you to remember something: 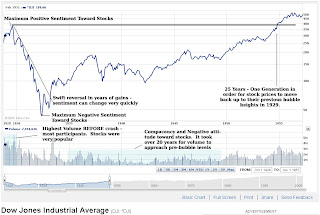 The psychology toward stocks at the market peak in 1929 was about as positive as it was toward credit:  Namely, that stocks always went up and that credit was the true fuel upon which the fires of the economy must feed.  Why, that's why there was such amazing growth!

The result of this "pro-paper, pro-credit" mind set was a huge bust. On top of the bust - because of the policies of the Federal Reserve and government, slowing down and dragging out the cleansing of the mailinvestments during the "roaring twenties" - what should have been a very sharp and deep (but short) recession with rapid deflation, turned into over a decade of misery.

The perspective toward stocks changed.  Nobody wanted them in 1933.  In fact, it took an entire generation (25 years) just to get back up to that same level in the markets that sentiment hit in 1929.  Remember that, and keep in mind that sentiment toward stocks from 2000 to 2007 was at an all time high period, as represented in percent of net worth, and in percent of GDP.

And finally, this:  "History never repeats itself, but it often rhymes."  Mark Twain

Enjoy your Thursday, Dear Readers!  I've had a ton of questions the past week and I'm sorry if I haven't gotten to them all, but it's been crazily busy - however, I promise I will try to respond within a couple of days from when you send them.

Be Safe out There,