In my last article I covered one of the companies directly involved in the oil spill, and suggested that more downside was coming.  This, I also asserted, would be partially affected by a slide in the price of oil.

That was on April 29.  Since then, we have seen a significant correction in stock markets the world over.  Furthermore, since pointing out that (despite being the "darling" of the world in economic terms) Asian markets were getting ready to roll over once again, they have done just that.  Shanghai's market has now surpassed the 20% drop point from its market high, putting it into a technical bear market.  On April 28 I posted that another drop in the broad US markets was also coming - at the time, I didn't foresee a 1,000 point candle.  However I have written in the past that during this next major leg down parts of it will be so furious that it might be unwise to be a participant at all - what's the point of being short if you can't close out your position?  We saw erratic and erroneous behavior on several tickers last Thursday, including transaction prints running 25% in or out of the money as the entire side of a Level 2 was blown away.

A slew of emails in my inbox since Friday have continually asked the question "was the 1000 point drop in the markets a computer glitch?", or something along those lines.  In short, no - it was not.  In fact, the reaction to such a drop begs the question in regards to financial assets as a whole;  If a massive drop on last Thursday was immediately disredited as a "glitch" in computer trading, then why was a 14-month record gain posted yesterday accepted with smiles and gratitude? 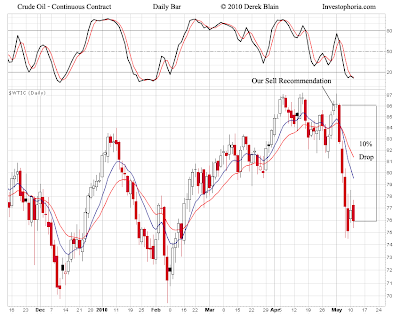 Oil has suffered a quick haircut since I posted my turning point on April 29, down 12% - along with it, RIG continued its slide by another $10.00/share.  While the US Government may place a moratorium mid-term on offshore drilling to appease the beating these companies will take, offshore drilling is going to be one of the cornerstones of world energy for decades to come and RIG will be there to profit from it.  (For an Austrian Economics perspective, and one that I certainly share in regard to this incident, I encourage you to read this excellent article by Murray Rothbard)

I am not buying shares yet, but they are looking more appealing than they were 3 weeks ago (down 24%).  Our other recommendation, STD hit our Wave 3 target of the low $9.00's and has surged up to just under maximum retracement - any break of $12.36 indicates the mid-term downtrend is over and a bullish run is to be expected.  Our stop is set just above this point, with our closing target still set at below $4.87/share

GOLD AND SILVER
Gold has broken its all-time high today, negating the current bearish forecast I have been working with since late last year.  Despite this, at least a minor correction is to be expected with the current DSI levels reading 95% - pretty much every one who can get on one side of the trade is there, and this usually marks an ideal turning point in gold.
Despite that, one must not forget our investment philosophy at Investophoria.com - be safe with the money you cannot afford to lose, and take high-probability opportunities with smart money-management and well-defined stops with the money you can.
Precious metals are what we recommend for savings, not for "investment" - this point has been covered in detail for ages.  On many occassions readers have asked, both via email and through public posts, whether they should buy gold and silver - my first response is always:  Do you own any yet?
Whether gold goes to $1500 or $600, you should have some on hand;  It's real money.  The same goes for silver.
So, with gold's break my forecast for much lower gold seems to have been negated (for a while), and the pathway is clear to up to $1325 gold.  That's not saying that we'll get there, and that bieng long right now is even close to a safe bet, but optimistic extremes can carry to head-scratching heights, and gold may well just be the last domono to fall.  A downward correction at this point would be healthy as sentiment is very elevated towards precious metals.  I will keep a close eye on price activity to see if better targets for upside and downside time and price can be established.

One thing to keep in mind, which still lends to silver's bearish case, is that the stab up to the top of the trendline has finally been put in - this completes an almost ideal ending pattern for an uptrend, and offers a high-probability that it will turn very soon.

Whether or not it is believable today, deflation is on its way, and will rear its head soon - even the skyrocketing bond-yields on government debt are deflationary in the short term - more capital will have to be diverted away from private sources and to government just to service debt, and defaults will take swaths of "wealth" from balance sheets the world over (upon which more debt has most likely been taken out for speculation, in many instances).
With gold's break to a record high, it just goes to show that (because of one of the most commonly cited reasons for gold ownership) everyone is betting on inflation, and lots of it.  And when everyone is betting on one side of the trade, it is not necessarily the safest place to be.

As always, if you have questions, concerns, ideas, or just a friendly (or unfriendly) hello to say, you can email me at:  Derek@Investophoria.com

P.S. I apologize for my absenteeism over the past couple of months.  I have been very busy out and about for much of my days and as such will be posting evening articles over the next few weeks.
Posted by Derek