First off I am going to address one of the few open recommendations I put up in my last post.

This trade has so far panned out to plan.  After a final surge and throwover the upper trendline to complete the entire pattern from $17.90 / share, the stock is entering a large corrective stage that should play out over several more weeks and possibly months.

Initial taget is the gap-fill at $183.00, where a close-out of 50% of the trade would be wise to lock in some profits.  Stops can be hiked down to just above potential retracement point at roughly $223.00 per share, right above a gap-fill that could draw prices up in a counter trend move.

After this, the price should break free from the channel to the downside and offer higher profits.  Stops can be rolled down to accomodate.

I am still holding no position in US Treasuries as I think they have at least another several weeks of rallying ahead of them.  The move thus far indicates this is the case and is nowhere near enough to be counted as a full counter-trend move.  That being said, the next move in treasuries should be a hefty one and having some cash positioned to take advantage could prove extremely profitable.  In the next leg I plan on shorting TLT instead of using TBT as I think the % losses in terms of actual dollars and cents will be far higher than the % gains in terms of dollars and cents with TLT.  I will once again be using a direct short-sell coupled with options plays.

GOLD AND SILVER
As to my writings in the past on gold and silver, the metals have relentlessly pounded higher making me look like a fool in the past while.   My only saving grace is  the fact that in fall of 2008 I was scooping up physical metals and buying silver and gold miners like crazy.  The fact that I sold the stocks or "lost" them to cash buyouts by late 2009 still left me with the lion's share of gains in equities terms, and I haven't sold a gram of my physical.
My position, for the umpteenth time, on the metals:  If you don't own any physical metal at all, you should.  Regardless of hype or hate, they are money, they have functioned as money more than any other item and always in the most advanced economies of history.  So, if you don't have real money, you should really get some.  It's a lot more likely to survive than cash in a house fire (although I do recommend keeping some of that under the mattress, proverbially speaking, as well.)  Is it a smart idea to take a huge block of cash right now and throw it into metals for savings?  Smart no, but you could do a lot dumber.  I would suggest averaging in and treating it like a constant deposit savings account.  I frequently purchase my silver from NW Territorial mint and have been very happy with their product lines and delivery times.
That being said, gold and silver in the mind of the world is not money just yet, but an "alternative asset" to traditional ones.  Precious metals are traded in an intangible financial market for the most part, and as such are subject to the exact same emotional and powerful forces that any other financial asset is subject to.
The recent run-up in commodities in general has not been the subject of "fundamental" factors.  It has not been the subject of massive inflation.  It has simply been the subject of a "reflationary" period in pure psychological terms in which optimism has multiplied to both set new records and match previous records set in the 2008 highs.  The Daily Sentiment Index for Oil reached 95% this week, the same reading it hit in 2008 within a week of topping out at 144.00 / bbl and crashing an amazing 78% in a mere 5 months.  Does a 95% DSI reading by itself signify an imminent top?  No.  Oil looks to have a bit of room to run, but I am sharpening my short stick.
This type of one-sided psychology is prevalent in the commodities markets, with virtually all metals - including gold and silver, grains, oil, and many other commodities all reading 90% + readings of Bullish participants.  This is not a healthy market, this is a massively one-sided market that needs to unwind and potentially completely reverse the level of optimism.  Some of these market have already recently rolled over after rallying in tandem for many months, and others are still eking out new highs.

Gold's psychological position is similar to silver, although not quite as extreme.  Interstingly, gold is having a much harder time confirming the peak price in silver, and the HUI is having a hard time confirming the rising price in gold.  The precious metals market is diverging within itself outside of simply waning internal momentum.  This fracturing is often seen in significant broad-based tops (DJIA versus Transports, according to Dow Theory, is a high-probability of an impending reverse of trend).  I believe we are witnessing such a peak at the same time as inflationists believe we are now (finally!) entering the period where inflation really accelerates.
I do expect gold to eke out a new high above this one, however this is not a time I would be adding anything "glittering" to my portfolio.  Sentiment is at a long term extreme and this is becoming a band-wagon trade in the immediate term.  The faith that proponents have in its continued rise is remarkable.
Even Goldman Sachs posted a report at the start of the year stating that they expected the average gold price to be $1650/oz, 15% higher than the current levels.  Major gold producers like Barrick Gold, AngloGold, Freeport-McMoRan, and Kinross have strong coverage from analysts, with less than 5% offering an opinion as negative as "underperform" and 0 recommending to sell. 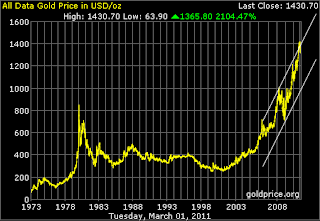 All of this after a move like that.....  What were they saying in 2001 when the last analyst covering the market finally threw in the towel and Barrons said "I see literally nothing good about gold right now"?

Those are my current thoughts on gold and silver.  The silver short is still in play, and I have currently moved my stop all the way up to $37.50.  So there is some significant downside risk to this trade if the price rockets to the moon like everyone is betting.  The reason I'm holding out is that everyone is betting, outside of the commercials and the devlish JP Morgan Chase, that silver is a bull's dream.  This is a mature price structure with a one-sided retail participation that has jumped immensely in the past 12 months.  A move of this type, once it reverses and regardless of the asset since they are all subject to the same herding forces of participants, turns quickly and profits can be made blazingly fast.
Best of luck out there.  More thoughts on the broad markets as a whole coming soon.
Cheers!
Derek.
Posted by Derek