Yes, I am expecting some Hate Mail for This....

Hmmm.... Gold couldn't quite break the huge psychological ceiling of $1000/oz today.  It will.  Fairly soon, I'd be willing to wager.  But that will be its last gasp- just when the die-hard gold bugs victoriously wave their hands in the air.  There's been a lot of gold bugs around these days.

After that,a not-so-orderly decline.  To a price where the buyers of today feel disgust at best.  I'm going to illustrate my point on another level here.  Outside of the inflation/deflation argument for just a minute.

What if gold is a bubble?  What if gold has been a bubble for over 20 years, trying to unwind but held up by die-hard optimism of its followers.  And now that optimism seems to have spread around to hedge funds, central banks, et al.

That's the point where you want to start getting a little fearful.  Remember Warren Buffet's old saying - "Be greedy when others are fearful, and be fearful when others are greedy".   Well, as illustrated in yesterday's ETF inflows chart, I'm seeing a hell of a lot of greed.

And don't for a minute think that this is a one-of-a-kind "investment attraction" scenario for gold.  That this is the only time in our lifetimes that we have seen this kind of attention.

What about the 1980's?  If you price out the high of gold in today's dollars you end up with about $2100!!  That is TWICE the amount of money suckers are paying right now.  What's even crazy there is actually MORE speculative money/credit still floating around out there and yet the price of gold isn't CLOSE to its all-time high.

But, like I said before, what if gold is still unwinding a bubble?  What if we are actually seeing a long-long-term sentiment-based series of events playing out before our eyes under the clever ruse of an inflation-deflation scenario.

Like I said yesterday, I believe in gold 100% philosophically.  I believe it keeps people free and governments chained up, as they most certainly should be.


But I also have started thinking something else recently.  Allow me to explain.  (An ode to sweet visual aids, anyone?) 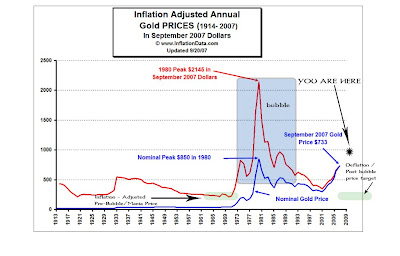 The Craziest thing about a bubble is the utter mania that characterizes each and every one during and to the height of the bubble.

When it's over, the market takes those gains away in a real hurry.

As you can see.

Looks kind of familiar, doesn't it? 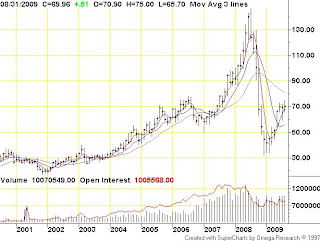 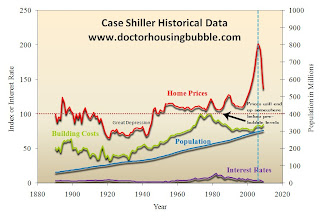 And of course This 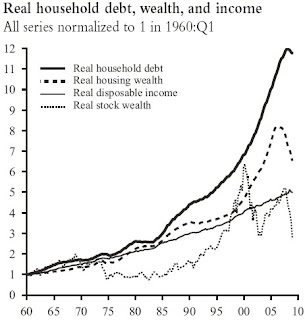 And who in their right mind could possible forget This.  The driving factor behind some of "those" and many others not shown here...

Anyway, back to my main point.  After much ado.

Gold is in a mini-bubble of its own.  A sentiment bubble.  A psychological bubble.  Ask any guy or gal on the street if gold is going up or down, and what do they say?

I know what they say, because I have been saying it for years.  Except, now that everyone seems to be listening, I have a feeling it might be time for a change of tune.  For now.  And telling you that I think gold could see the unimaginably low price of $350 is the type of melody change I'm talking about here.

Call me crazy again in 2 years.  That's probably about the time people WILL be because I'm buying the stuff.

And that, dear readers,  is just the point.