An Opportunity in the Making?

Any hard asset investor can hardly call themselves such if they don't have at least one oil stock in their portfolio (this, despite the fact it's gooey, slippery, and definitely not hard).  I recommended some oil companies in late 2008 and early 2009 which were extremely profitable.

However I am looking at another potential setup in the fairly near future (anywhere from a few weeks to several months).  Something to keep in mind, anyway. 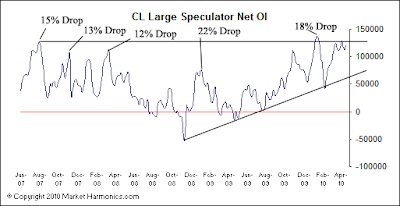 While looking at only the number of open contracts aside from anything else is not a great idea for trading oil, it is a nice piece of data to show where overall sentiment is sitting.  As of right now, it's pretty elevated - I'm not saying we won't see another surge up in oil, but upside in the immediate future should be fairly limited.

The particular stock I'm looking at isn't an obscure name by any means (they are the biggest in their industry), and they have been tossed around for years now by major publications.  That being said, most of these guys were recommending the stock before it took a 75% hair cut along with the market.  It is still under 50% of what it was at the oil peak in 2008.

The company is on the higher end of fairly-valued right now, but fairly valued nonetheless.  As of today, it trades at under 9x Price/Earnings, 1.33 Times its Book Value, and 2.36 x Gross Revenue.

All in all, revenues are up, the cash position is strong, assets are generating tons of cash, and demand for the product they offer is growing steadily with growth potential reaching far out into the future.

The company is one I'm sure you've heard of before.  Transocean (RIG on the NYSE), headquartered in Switzerland (for tax purposes), and with the largest fleet of underwater drilling ships on the planet.

This is not an easily entered industry - It is extremely capital-intensive ($500 + Million to build a drilling ship), which offers an excellent natural barrier to entry against a wave of new entrants/competitors.  Furthermore, the type of clients that Transocean deals with aren't fly-by-nighters or small-time companies where taking their business may be a bet on receiving payment.  Transocean's customers include Chevron, Exxon, and many of the other big players exploring and tapping underwater reserves - Most of these guys have stockpiled tons of cash over the years and are hungry for new projects to keep revenues up as older project output dwindles.

From the technical side, it doesn't look like the stock has a high-potential for further upside in the immediate future.  As far as sentiment tops go, the recent major push by the Obama administration encouraging underwater drilling is a re-enforcing signal of an interim top in positive psychology.  As sad as it is to say, the oil spill in the gulf of Mexico is as fitting an occurrence as could be in the wake of that sentiment (remember, the State is always a late-comer).

This should provide a mid-term negative backdrop for the stock to settle into a more opportune price-level and make a great addition to a long-term core portfolio.

I'll keep you updated on this pick and let you know when I'm going to scoop up some shares.  At this point, the stock looks to be building for a major move with downside potential being far greater.  That being said, key resistance is at $93.25/share, and a daily close above that mark would indicate a major bullish breakout potential in the immediate future.

Have a great weekend everybody!  As always, if you have any questions or comments you'd like to send me directly instead of posting on the blog, I can be reached at derek@investophoria.com